Primo: I sent my mom's silver to Ted and Ted'sWife.

Me: The sooner they are out of our lives, the better.

Primo: Yeah. I figured that maybe getting something valuable would shut them up. Ted'sWife was upset about not getting the family silver, so now she has some. Or she can sell it. You know - to make up for the expensive bracelet she is not getting.

Me: I want these people gone.
Posted by the gold digger at 3:22 PM 7 comments:

Primo got that email from Ted about the realtor commission. Made me think of this Dilbert cartoon.

I can't remember what I have told you about and what I have not. I take notes and then write posts later and I don't put in the full context that Primo is so tired and he gets lonely when he is in Florida and he calls me two or three times a day and I get tired and I miss him but because I am a bit of an introverted bitch, I don't mind so much that he is gone except I hate the impact on him. I would like him to be gone a little bit for reasons he would enjoy, not for reasons that make him miserable.

It's been a year since this whole drama started, a year since Primo quit his job and flew to Florida almost immediately because he thought Doris was dying. He has has been gone for a good part of the past twelve months. It has been exhausting for him and emotionally awful. He wants to do a good job settling the estate. I just want him to be done.

Some of the BS - having to go to wherever they keep car titles in Florida to get a duplicate title, only to find the original title later that day in a folder stuck in the back of the closet labeled something like, "Important papers," having to send a notarized statement to the power company to keep the lights on at the house, getting calls from a collection agency on behalf of USAA for the car and homeowners insurance, even though the accounts are not delinquent - is just ridiculous and it makes this all the harder.

Sure, I agree that debtors should be paid before heirs, but how about if you wait to see if someone pays a bill late before you start hassling him? Primo and I do not pay our bills late. Primo pays his at the last possible minute (I ask him why not just schedule them to be paid the day they are due instead of waiting until the day they are due to go online and pay and I have yet to get a satisfactory answer) but he pays on time. There is not one single past-due account for the estate. Not one.

Primo is weary. I am weary. His dad is reaching from beyond the grave to be a jerk - this whole thing that Primo cannot be paid for any the work he is doing - is maddening. I put it in our will that my sister, who is our executor, should be paid twice per hour what she would make at her job to settle our estate. Our lawyer told us that those rates are set by statute and I can't have her paid more.

What this means - that paying executors is common enough that states set laws about how much money the executor should get - is that Sly went out of his way to make sure Primo would not be paid. And to make sure he wasn't in the will.

I don't care really that Primo was not in the will, but the fact that Sly threatened more than once to disinherit Primo - even though he was not inherited! - and then stuck Primo with all the work is so mean. Why didn't he just make the lawyer the executor and trustee?

Sly was a mean, petty man.

It's not like Primo is making any money right now, but he is losing time we had planned to be free time for him. And what if this had all happened while he was still working? He would be taking vacation to do this. Actually, he might have just turned everything over to the lawyer, which would not be a bad thing.

So anyway. Ted sent that obnoxious message to Primo about how Primo was doing it wrong by not negotiating a discount in the realtor commission and it made me think of this cartoon. Primo is Dilbert, of course, dealing with a moron, the only rational voice in a sea of idiocy, except Ted is actually the only idiot voice in a sea of otherwise niceness. Jack has been nice, Stephanie has been nice, my nieces and nephew are stellar, and Sly and Doris' next door neighbor has been an angel.

Found this on the bed. 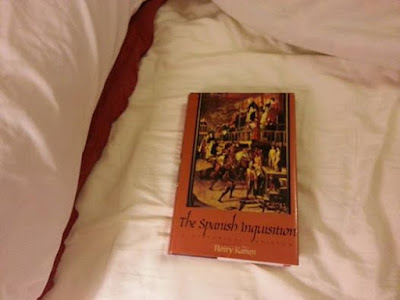 In which Ted is laughing Primo out of the room because Ted, in addition to being an expert on brain surgery, is also an expert on selling houses, even though he has lived in the same house since before I met Primo and I think for over 20 years


Primo
You saw my email to Ted and Jack, right? The one where I told them I had sold the car, sold the rest of the furniture, gotten the a/c repaired, upgraded my mom's computer for Jack, and listed the house with an agent?
Me
jes
it was very nice


Primo
Ted responded. It was not an angry/asshole response, but he said that he hoped I'd negotiated a lower commission rate with the realtor. (I did not. I suppose I could have tried, but he could have brought that up earlier if he had not been so busy being an asshole.)
Me
WTF???
Again, you have disappointed Ted
Seriously - this from the man who wanted to be paid to go to his own father's funeral
and wanted $875 for a FF ticket
the only costs he is worried about are the ones that don't affect him
Man. Every time I think he can no longer surprise me


Primo
I think 1% is not worth fighting over. And I'm getting more for "our" money with this guy, who is going to take care of a lot of the small tasks himself.


Primo
He wrote "I hope you got the real estate agent down to a 5% commission. Six-percenters get laughed out of the room these days."
Me
Oh sheesh
He had to find a way to insult you
I hope you are ignoring him
his email does not deserve an answer
not to mention, he knows this how?
from his vast experience selling houses?


Primo
OK, then I don't feel bad. There is lots of stuff on the Internet about negotiating commissions, but in this case I am trusting someone with the house while I am away!
Me
it
s one damn perfect
percent


Primo
I know. I don't care.
Me
and frankly, there is only so much emotional investment


Primo
He had to find some way to criticize.
Me
that you should be expected to make in this
yes he did
I mean, it is $3,000-
but a good realtor is worth it
mine sold my house in three days
which dramatically reduced my stress


Primo
And that person got 6%, right?
Me
Yes
it is not worth thinking about
and Ted is being a jerk


Primo
The seller chooses the rate, and I assume that you signed for the standard 6%.
Me
he just had to pick at you
I sighed the standard


Primo
OK, then I don't feel bad about doing it.
Me
I had heard of negotiating the rate
but it didn't occur to me


Primo
And you are picky about saving money!
Me
yes
I just wanted a good agent and I wanted to sell
and I got my money's worth


Primo
Maybe this is Ted not being a good liberal.


Primo
This is Jason's livelihood. I don't want to cut his pay. He is going to go the extra mile for me. He is probably there working right now.
Me
what is his deal?


Primo
As [Stephanie's boyfriend] said last night, Ted is "a piece of work."
Me
amen


Primo
I do feel bad for him. He is the oldest of his father's four children but is not in charge of any estate matters. He is the oldest of his mother's four children, but [Ted's other half brother by his mother] and his mother are co-trustees and I assume that [other half brother] will be in charge when she dies. But Ted has given people reasons not to trust him!
Me
Exactly
It's OK to feel bad for him
but that does not give him license to treat you badly


Primo
Exactly.
Me
and it is not your fault that he is being treated that way

Me
he has brought it on himself