In which Primo and I talk about whether you ask friends who do not live in your district for money and we decide no, even if the friend has said that of course he would donate to the campaign he has given to candidates he likes a lot less than Primo

Because we are so lucky to have so many wonderfully generous friends, a lot of the costs of Primo's first campaign four years ago were covered. It made Primo sick to his stomach to ask friends for money - people, this is the absolute worst part of running for office, worse even than hiding your affairs and your sexts and whatever.

I joke. Primo is not having an affair. He can have an affair instead of running for office - indeed, I have suggested to him that he might consider that approach - but he cannot have an affair AND run for office.

You have to choose.

Anyhow. Asking people for money is really hard and that's why rich people run this country, not so much because they pay for their own campaigns, although that's part of it, but because they have a lot of friends who are as rich as they are and will give them money.

For his campaign for Congress two years ago, he asked nobody for money. He was a candidate as a favor to the party. There was no chance for him to win. He was not going to waste any goodwill begging for that one.

Now we are here, at a campaign for the state house that he actually could maybe win in this bizarre election year with its two "Which one do I detest less?" candidates and everything is up for grabs.

We saw these friends - let's call them Prakash and Kavitha - a month ago. They are college friends - Primo and Prakash were in the same dorm and have known each other since college; I met Prakash at our reunion last fall and found him delightful and found his wife (with whom he had an arranged marriage, which is not such a bad idea when you think about how important having similar values and backgrounds is for a successful marriage - it has clearly worked for them) to be absolutely charming.

Primo had called Prakash for his first campaign and Prakash wrote a check immediately. We were stunned by his generosity - he lives nowhere near us and would not be affected by Primo's winning.

Then for the Congressional campaign, Primo didn't ask anyone.

When we saw Prakash and Kavitha last month, Primo had not decided to run. He was actually leaning toward not running, which, as you know, made me very happy.

We talked about the first campaign and thanked P&K again for their contribution, which was when Prakash said that he has given money to candidates he liked far less than Primo and Primo should of course ask him.

FF to now. Primo has decided to run again. I am not thrilled, but I keep repeating to myself the refrain that soothes me:

Primo: Should I ask Prakash for a campaign contribution?

Me: It just doesn't seem right.

Primo: I know. You're right. It's just that he said - but it seems so wrong to ask our friends for money.

Me: He sees what you post on facebook. You have a contribution link. If he wants to, he can.

Primo: Yeah. But it would be crass to ask him. OK.

I don't think we are in the right business.

In which it is the Friday of Memorial Day Weekend and when I tell Primo I am bored, he asks if I want to collect signatures for his nominating petition, and I laugh because there is no boredom boring enough to make me want to go door to door with a clipboard talking about politics with strangers 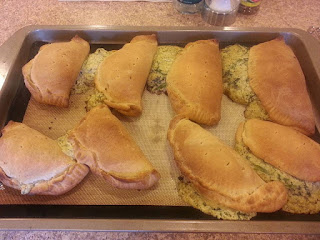 Instead, I will just stay home and be bored.

1. I already tried making calzones today. I am/was working from home and made the filling and the dough last night. Here is what I have learned:

2. I have leftover pesto+ricotta. (I have been trying to use inventory in the freezer and I have a ton of pesto from the Great Basil Harvest of 2014.) I also have a friend who is going through chemo. He and his wife were in the Peace Corps with me and live in the capital city. Primo has to drop off his nominating signatures by June 1, so is planning to drive there next week. I will make a new batch of better-looking calzones and send them with him for Joe and Joyce. Primo is going to look in the freezer for some sausage to add to the filling.

3. I am also going to bake some orange-poppyseed bread from my mom's recipe to send with him.

4. And I am going to make a pie from the last bit of pears from our tree. I have become a champion pear pie maker. I use the apple pie recipe from Bon Appetit. And lard. I use lard in my crust. I will not send the entire pie to Joe and Joyce, though. They get the entire poppyseed bread and a few slices of pie.

7. I am not going to collect signatures.

She emailed him last night:

Keith this is a courtesy email, just wondering what happen, it's the 26th of May,2016. And your 21 days have expired. I didn't receive anything from you... If I don't hear anything from you by May 31st, 2016. My only option is to go to Small Claims Court. (Tenant)

He mailed her a letter and a check for $500 last week. Sent it registered mail. She is not getting any of her security deposit back, but is getting her pet deposit back.

If she doesn't have it by now, either the post office messed up (highly unlikely - our post office is really good in this country), or she gave Keith a bad address. 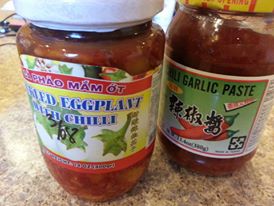 This stuff was already old when we moved. I don't think we are in danger of starvation, so it is safe to toss ten-year-old pickled eggplant.

Primo: My aunt is going to die.

Me: We are all going to die.

Primo: I mean soon. She is in hospice. I just spoke to my cousin.

Primo: She got the DVD I sent* and was able to watch it.

Primo: But I told my cousin that I am running for office. I think that will set the stage for my not being able to attend the funeral.

Me: I think that's fine.

* With the photos Primo displayed at Doris' funeral. There were many of Doris as a young woman before Sly got to her - she was drop-dead gorgeous and she looked happy.
Posted by the gold digger at 3:18 PM No comments:

In which the devil must be looking for his sweater because Primo is asking our back yard neighbor, a retired maintenance guy who had refused to sign Primo's nominating petition a few years ago but signed yesterday for this campaign, for help with the lawnmower

Me: Not my problem. I'm working.

Primo: But it's not working.

Me: Shhhh! Leave me alone!

Primo: Guess what? Bill was outside so I asked him what he thought. It was just last year that he repaired it for us, right?

Primo: So I told him I would take it over once I was done cutting the lawn.**

Primo: But then he said that he thought it might just need a new air filter. He happened to have one and gave it to me.

Primo: It didn't work. While I was replacing the filter, he was googling. He came back out and said it looks like it just might need a carburetor adjustment. I said I would take the mower over there and he said he would come over here!

And then Bill came over, repaired the problem, played with our cat, and left.

Who was that masked man? I wanted to thank him.


* Bill asked me last year if we would let him repair the mower because it was too noisy and it was driving him crazy. When we bought our house, we closed five weeks before we could move in. Bill came over and cut our grass and moved all the trash cans the previous owner had left on the curb to the garage.

** Which is not the worst thing in the world when someone is willing to repair your gas-powered devices for free, but he is our exact backyard neighbor. We live in the middle of the block. And there is a big fence between us. It is the maximum walking possible.
Posted by the gold digger at 9:55 AM No comments:

Me: I know you're not calling me because you messaged that you would be home at six so we could get to the play on time and it is now 6:11.

Primo: It was 5:52 and I was walking past Roberto's house and I thought, "I have the perfect excuse to get the signature and get out!"

Primo: He asked, "Who's your campaign manager? You have to pick one! You need to run it by me!"

Primo: He said, "We need to come up with a strategy to win this district!"

Me: Yeah. He talked about that last time. That's all he wanted to talk about last time. We needed someone to deliver yard signs but he wanted to re-do the strategy one week before the election.

Primo: Then he asked, "Do you know people to talk to about campaign managers?" I told him he had met B at that campaign event at our house and he said, "I met B and you need someone with more skills than that!"

Me: We are not hiring a campaign manager! What we need is someone to collect nominating signatures.

Primo: I think I could get him to do that, but I would have to spend an afternoon listening to him. He is a really nice guy---

Me: But he is not focused!

Primo: I told him we are not hiring a campaign manager this time - that we hired one last time and it was a disaster, plus we don't have the money this time because I am not working. And I promised you that we would not spend money.

Primo: I thought if I told him you and I were going to the theatre that he would just sign, but he said, "Come in! Come in! Let's talk!"

Me: You didn't go into the house, did you? Because that would not have been a good idea for getting out of there quickly.

Primo: I know. He's so excited about the theory.

Me: But right now, you just need someone to circulate nominating petitions. Bless his heart.

Primo: I know. Bless his heart.
Posted by the gold digger at 4:12 PM No comments: