The Candidate's Wife: I love BEING RIGHT

Just two hours ago, Primo was telling me that going to a play was not a good way to campaign. I said that all he has to do is wear his "Primo for State House" button and maybe introduce himself to two or three people and that other opportunities might arise organically.

(I also pointed out that he could promote the event with something about how this was a fundraiser for arts in our schools and wouldn't it be great if all public schools had the funding they needed.)

So. I suggested we go to the ice rink in our neighborhood - they were having a family skate night. 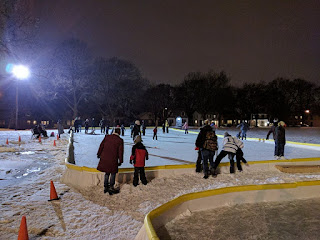 We got our skates. Somehow, talking to the three women who were volunteering to hand out the skates, we got on the topic of being tricked into moving here where it's cold and being tricked into marriage to a politician. That is, Primo got to introduce himself to three voters who got to

When we were taking our skates off, a woman sitting next to us asked Primo about his campaign button.

Woman: I have to ask. I see your buttons. Are you running for office?

Primo: Yes. I am running for the State House as a [Primo's party].

Woman: I knew it! I was a Poli Sci major in college. I volunteered on X's Senate campaign! I did doors, I called, I went to events! It was great!

Woman: And you're in the neighborhood?

Woman: That's my district! That's fabulous that you are running.

Primo: I don't have any cards with me.

Me: Want to do doors again or are you done with that?

Woman: I don't think so - but you never know! I will find your campaign page! Good luck!

PS That dialog is just the skeleton of what we said. I am lazy and didn't want to write everything. But the Poli Sci woman and the three women who were volunteering and I covered, in detail

Posted by the gold digger at 6:11 PM No comments: