The Candidate's Wife: The morality of being On Time (Hint: It is wrong to be late)

Primo: I have a meeting tonight. The new chair has decided we will have a consensus-based agenda.

Primo: We are supposed to read the materials before the meeting so we don't spend time at the meeting reading them.

Me: That's the right way to do it.

Primo: We have also agreed that the meeting starts at 6:00.

Primo: Whether people are there or not!

Me: That's the right way to do it!

Primo: But last time, only half the members were there at 6:00.

Me: So? Why should the people who are on time be punished?

Primo: But it's stressful for me!

Me: So your time is more valuable than mine?

Primo: Even the theatre starts at five minutes past four! The tickets say the show is at 4:00!

Me: It is extraordinarily rude to make other people wait because you can't be on time.
Posted by the gold digger at 2:32 PM 2 comments:

The Candidate's Wife: Primo sort of asks his best friend for money for the campaign

There was a reunion event Saturday night. Primo's best friend, BF, had donated $500 to the event. Undergraduates and recent graduates - that is, people paying off school loans - were going to be attending and it was a nice way for BF to help pay for some of them.

Primo: You guys bought a table?

(Technically, there were no tables, but you get the concept.)

(You can ask this kind of question of your best friend.)

Primo: You bought $500 worth of food and drinks?

BF: Yes. It seemed like the right thing to do. Rice did a lot for me.

Primo: Would you like to buy $1,000 worth of campaign for [our state] legislature?
Posted by the gold digger at 2:53 PM No comments:

The Candidate's Wife: We go to a class reunion in Houston and discover other classmates running for office


We love going to Houston.

Wait. We love going to our class reunions. Houston? It's gotten a little bit crazy. But still - it was warm and sunny and beautiful. I texted a photo of the quad, with green grass and sun, to my boss and he texted me a photo of the parking lot at work covered in snow.

I miss Texas. I miss it so much. It's not cold there!

But we couldn't get away from politics.

My friend Ruthie ran a campaign for a school district candidate and won against an incumbent. She had great campaigning advice.

Our friend Robin introduced us to a friend of hers who is running for Congress in north Texas. I asked Jana Lynne how she was raising money.

"I spend seven hours a day on calls," she said. "But only five on Fridays."

Let me translate that for you in case you don't speak the political lingo.

She spends seven hours a day calling people to ask them for money.

This is the part of running for office - of politics - that everyone hates.

This is why rich people run our country. They have their own money to spend and they know rich people who want influence.

If you are an ordinary person running for office, you don't know the rich people and if you are Primo, you want to be the person who represents all the people, not just the rich ones, so you don't want to be beholden to anyone.

All the People? They don't have money to give to politicians. Every dollar is precious and hard earned. That's why

1. It's so hard to ask people to give their money away

2. We are so, so grateful to everyone who makes any contribution to Primo's campaign. We know that every dollar someone gives to him is a dollar they can't spend on eating out or on something fun. (I hope nobody would give to a campaign rather than pay the electric bill!) 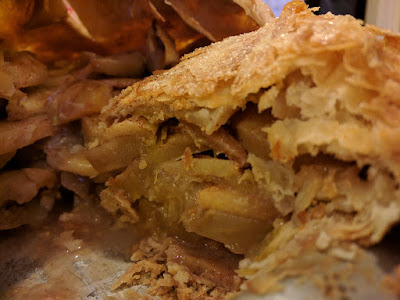 Verdict: Bottom crust nicely done, but cleanup of melted butter on frying pan too much of a hassle. I need a pizza stone.
Apples collapsed: The Serious Eats strategy of poaching them ten minutes in boiling water is not enough. I will return to Bon Appetit's 45-minute pre-pie baking.
Crust: AWESOME AS ALWAYS. BraveTart's crust strategy is excellent and easy. Can you see how amazingly flaky that crust is?

Primo How about "The Candidate's Wife Bakes"?