In which I read some notes Sly wrote in the middle of the night and they are actually kind of heartbreaking, y'all

Again, we are at the reunion - but this did happen.

Primo handed me three sheets of paper that had almost illegible writing on them.

"These are notes my dad made late at night when he couldn't sleep," he said.

I did not like Sly and did not think he was a nice person, but it is very hard not to feel sorry for a sick old man who just wants to go home.

He wrote, over the course of several nights, when he couldn't sleep, and, when, it appears, he was not quite in his rational mind, these things. This was written the week before Doris' funeral.

Thurs 3:00 a.m.
Good early sleep broken by meds
11:30 p.m. with full overhead lighting. No success re getting back to sleep, so up in chair. Read Gordie Howe article, fell asleep (!) until again awakened by medical procedure. Pee, partially wetting shorts.

6/10 doggie diapers - doggie ??? for Suzy when in heat. An outside butt-covering fabric, leather, possibly connected to a harness, but easily removable. ???poop receptacles easiy removed/replaced. Collection containers at street corners for ????

We are at our reunion, but I am posting this so you will have something to read today. 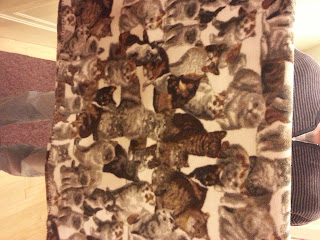 Oh man. This loaded sideways. I don't know why. And I am too lazy to try to figure it out, plus, the direction does not change the impact of the photo.

This photo is of Primo holding a blanket that he brought back from his mom and dad's.

He had sent me a photo while he was there asking if he should bring it back.

I had said no.

I know it is petty of me, but I do not want Sly and Doris' things in our house.

Primo: I know you said not to bring this.

Primo: It has KITTIES on it!

Primo: I HAD to bring it.

We are going to our college reunion tomorrow and there is a lot of stress because Primo is not a planner and I am and he is not a do it in advance person and I am so while he is piddling around in the bedroom stressing me out, I am on facebook.

We are talking about people in our class. I had one boyfriend while I was in college, dated another guy from my college ("dated" is perhaps not the proper word) years after graduation when I met him at an alumni event, and then met Primo at a class reunion.

So this other guy - Ted - I have written about here. (NO! I do not know why I named both Primo's brother and this guy "Ted." I did not do it right! Some kind of brain fart, maybe back when I didn't know Ted Drunk would become such a big part of this story. But still. For dumb.)

He was kind of a jerk.

Or maybe he is wonderful and I caught him in a bad moment. I don't know. Who knows what former boyfriends say about me?

However, the consensus in my neighborhood with people who had known Ted since he was a child was that he was a jerk.

He was not nice to me and it was hard at first but then I got over him and whew! am I glad I did because Primo is a MUCH BETTER MAN.

A few months ago, Ted tried to friend Primo on facebook.

Primo declined the friend request and asked me if I wanted him to beat Ted up.

I told him no, it was enough to know that I won.

Turns out that Ted is now following Primo on facebook!

I mean, Ted has to know that Primo is married to me. And he knows that he was not nice to me.

Is that a little bit creepy or what?
Posted by the gold digger at 6:30 PM 1 comment:

Primo and I are trying to get ready to leave for Houston tomorrow for our class reunion. The good news is that he and some buyers agreed in principle to the sale of his mom and dad's house. The bad news is that

Primo: How come you never have to stay up all night to get things done?
Me: Because I plan.Primo: How can that happen?Me: Because I define the critical path and if I have things to do, I do not go to political events or to sing karaoke.Later:
Me: I am going to put those bratwurst in the freezer.
Primo: Why don't you just do it later? You don't have to do it now.
Me: May I refer you to Exhibit A?


As in, Primo always waits until the last minute to do stuff because he assumes nothing will ever come up.

And yet, things come up.

Like the house sells after just nine days on the market.

This is good news. But Primo is all stressed out and he is the Typhoid Mary of stress, which means there is stress all over our house.

All I want to do is to pack (I have had everything planned since this weekend) and go to bed.

Anyhow - today is the ten-year anniversary of our meeting. I went to our college reunion, thinking I might find a Used Husband. (Actually, I was still sort of involved with the Moroccan Millionaire, or at least that was the story I was giving to my classmates, as I had just been laid off from my job and had neither husband nor children to give me status.)


Gold Digger
13 mins ·
If I had not responded rudely to Primo ten years ago today, telling him I was not waving at him when he walked into the reunion party with Sam and Sam'sWife, I might not be living in a place with snow today.
Posted by the gold digger at 4:55 PM 6 comments:

In which we attend a school for in-laws

Me: I just got such a nice note from this guy at work.

Me: His daughter got married this weekend. He has three kids - one daughter and two sons.

Primo [impatient because this is a story and stories are not his favorite]: And?

Me: I asked him how the wedding went and he wrote back, "Now I have three sons."

Primo: Just like my parents! When I married you, they embraced you and welcomed you. They said, "Now we have a daughter again!"