You guys, I promise I have not ignored your comments intentionally! Blogger has not been emailing me about comments. I usually write a bunch of posts all at once and then stay away for a week or two, checking comments on hotmail.

I don't know what's going on that blogger has decided to start keeping secrets from me.

While I try to fix that, tell me what this is. 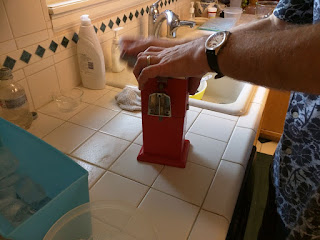 The Candidate's Wife: A big developer supporter tweets in support of The Challenger

1. Primo has been heavily involved in state-level party politics for eight years.

2. The Challenger has not, to Primo's knowledge, ever attended a single party event in the district, in this county, or in the next county. (The district spans two counties.) Which is fine. There are no rules about who can run for office. OK, there are, but having attended events is not one of them.

4. Big Developer Boss has met Primo. They Do Not Agree on development.

5. There do not appear to be any intersections between BDS and BDSB and The Challenger.

When The Challenger got a puff piece about her candidacy (more power to her - she is an excellent marketer) put in the paper, BDS tweeted it, along with a note that "Challenger is one of many bright new candidates!"

We have questions. How does BDS even know who Challenger IS? And why does he support her? BDS has been in our house for an event Primo hosted for another candidate. He knows Primo. He knows where Primo stands.

I guess he does not agree with Primo.


* When you inherit money, I guess it's like water. It seems free.