Did I mention that? That I am getting a migraine because I haven’t eaten?

I think I did.

It’s my own stupid fault for not having brought Emergency Food. I should never have assumed that being a guest in someone’s home meant that that someone would provide meals.

By 7:30, when we finally have supper, my stomach is full of Bad Cheese, but I still have a headache. I finally give up and excuse myself for a moment, but when I get into the bedroom, which is where my purse and my Imitrex are, I realize that I don’t have my Swiss army knife with me because I have been on a plane and I for once remembered to remove the knife from my purse before leaving the house so I wouldn’t

1.      Lose the knife or
2.      Have to run back to guest services and prepare an envelope for the nice volunteer to mail to me on her way home (after buying something – anything but coffee or liquid – at the Starbuck’s outside of security so I can break a $20 bill and give the volunteer the money for the postage)

My doctor writes the prescription for the largest Imitrex possible – 100 mg – and then I cut it into smaller pieces to take it. I get only nine tablets a month, regardless of size.

I take the pillbox into the kitchen, where I find a paring knife. I try to cut a quarter of the pill off the end, but the paring knife is so dull that it smashes the $20 tablet instead of slicing it. I watch most of $20 worth of prescription drug turn into dust and scatter on the counter with the cat hair and coffee grounds.

No matter. It’s still the drug. I pick out the cat hair and the grounds and sweep the dust into my mouth. My people do not waste.

I return to the table, the pillbox in my pocket, and try to pretend to be interested in the conversation. I poke at the food on my plate while Sly and Doris talk to Primo, ignoring me. The conversation continues along the same lines as before: All the stupid people, including Stephanie, who are ruining life for Sly.

I force myself to take a few bites. Who knows when the next meal might come? I also make a mental note to escape the next day to a grocery store – there is some advantage to having the rental car – so I can buy some snacks to hide in my suitcase. I should have slipped some cheese and crackers into a napkin and stuffed them into my purse.

Ch 1 Sly thinks everyone else but him is stupid, which means his life must be so, so hard

I finally have a chance to ask Primo about his dad when Doris leaves to start supper and Sly turns on the TV news.

Oh! Did you think Sly was going to help Doris with supper?

No! That is not happening! Preparing food is women’s work!

Me: What’s the deal with your dad? He’s convinced that there is no valid opinion but his. Is anyone who disagrees with him stupid by definition? Is he not capable of a rational discussion? Can’t there be a quiet, calm conversation about an issue without someone having to be labeled stupid or idiotic?

Primo: Nope. Only stupid people disagree with him. That’s the only logical reason for someone who doesn’t think the way my dad does. Come here. I want to show you something.

He leads me into his dad’s office, which contains a futon (no, I don’t know why and I really don’t know why Primo couldn’t sleep there if the spare room is too much hassle), two computers, and a lot of books and boxes of books and books stacked on top of each other. Books Sly had paid to move from Pittsburgh to Florida and hey, it’s his money, but dude, if you are retired, do you need to keep all of your professional books?

Primo: Look at this. 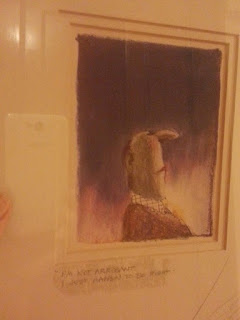 He points to a framed cartoon hanging on the wall. It shows a man with a big nose, nose in the air, saying, “I’m not arrogant! I just happen to be right!” Only the “I’m” and “I” are covered by small pieces of paper taped on the glass that says, “We’re” and “We.”

Primo: I found this at a crafts fair. I laughed because it was my dad. He always raises his nose and sniffs like that. And he is so arrogant! Everyone else is always wrong. He won’t even consider other opinions. I bought it and had it framed and mailed it to him for his birthday. I thought he would think it was funny.

Me: Except your dad doesn’t seem to have a sense of humor, at least not about himself.

Primo: Nope. My mom said he got really mad when he opened it, so she taped the corrections on the glass. I’m surprised he just didn’t throw it away, but my mom probably wouldn’t let him. She thinks it’s really funny.

Primo: What do you mean?

Me: I mean the cussing! I mean their potty mouths! It’s not like I’m perfect, but I don’t talk like that in front of people I don’t know.

Me: They cuss. I don’t know how you can’t notice. You don’t talk like that. You must have noticed at some point.

He shrugs. I guess he is immune.

Posted by the gold digger at 8:37 AM No comments:

If they had picked us up from the airport, we would have had to listen to Sly and Doris talk about Stephanie, AKA Satan Incarnate, the entire time. They really hate her. Maybe she’s an awful person.
Posted by the gold digger at 8:36 AM No comments:

The conversation moves to Those Stupid Creationists.

Let me go on record that I don’t believe in creationism, but how one regards the beginnings of the earth is pretty irrelevant to everyday life. I would rather have a

living next door to me than

I have had those neighbors – the trash can on the sidewalk for days neighbors and the dog poop neighbors. I don’t know what they believed, but I do know they were bad neighbors. Who leaves so much dog poop in the back yard that you can smell it?

Give me someone who lives in a neighborly way – keeps his property neat and tidy so my property value is maintained, trains his dogs to be quiet even if that scary neighbor walks into her own back yard, doesn’t have frequent loud parties – and I’ll take someone who believes the moon is made out of green cheese over the super educated, super sophisticated jerk. What you believe does not matter as much as how you live.

Sly: We went to the gift shop at the park and they had creationism books for sale!

Clearly I am crazed with hunger and headache pain to even consider arguing with my boyfriend’s father the first time I meet him.

Sly: That’s crazy! Everyone knows creationism is wrong! What kind of asshole believes in creationism?

Doris, however, is unfazed by his language. She nods in agreement as she sips her bourbon.

Sly: How can they even let them sell those books?

Sly: It shouldn’t be allowed!

Me: This was a private store?

Doris nods again as she reaches for the bottle and pours herself another inch of bourbon. Maybe joining her is not such a bad idea. Does alcohol get rid of a migraine? My cousin Randy, on whom I had a massive crush when I was 12, only to discover later in life that he is gay, which made me sad for me, but really, did I have a chance with my own cousin, even if he is really a second cousin once removed or a third cousin or whatever it is when your mom and his dad are cousins?[3]

Anyhow. Randy swears by a regular Coke and two aspirin for his migraines. I should try that. With booze. Right now.

Me: Whether it’s right or wrong has nothing to do with it. Either you believe in freedom of speech or you don’t. You don’t get to decide based on content.

Sheesh. Aren’t Sly and Doris supposed to be the tolerant, sophisticated ones? Do I really have to explain the First Amendment to them?

Sly: They shouldn’t allow them to sell books that are obviously untrue.

The cheese cracker I am shoving into my mouth is clearly too late to address my blood sugar/judgment issues.

Me: Isn’t it better for bad ideas to be out there where they can be exposed?

Sly: They shouldn’t be allowed to sell things that are clearly wrong!

People have the right to be stupid. Should bookstores be allowed to sell books about astrology? It’s clearly crap. But do I care if someone else reads her horoscope every morning before making a move? Nope. Doesn’t hurt me at all, unless the horoscope is, “Don’t ever hire someone who has colored and cut her own hair after a job and a boyfriend loss.” Then I’m screwed because then, the stupid beliefs could affect me.[4]

The real issue is who gets to make these decisions. Who decides what is right and what is wrong? People like Sly – his personality, not his political affiliation – always know they would be the ones making those decisions. He would be running things were power to change hands. Which just goes to show he has a poor grasp of history. Except for the ones leading the revolution, intellectuals are usually the first to go. Didn’t he see The Killing Fields?

There is no point in arguing with him, so I shut up. How do you convince someone that it is a bad idea for the government to make those kinds of decisions when he is so sure that power would never be used against him?

My shutting up does not stop Sly from continuing to express his opinion.

[1] I am saying it to you guys because 1. I am anonymous and 2. I trust you. We are all friends here, right?
[2] Implied but not said out loud: “It’s just idiotic Christians who believe the crap their church tells them. Trailer-park cretins who don’t have any education and can’t think for themselves.”
[3] Plus, also – Falling For Gay Men. Who among us has not dated a man whom she later discovered was gay?
[4] Oh like you have never cut your own hair and then dyed it Clairol #22 Cinnaberry Red. Cast away, sinless long-haired, natural hair color people.
Posted by the gold digger at 8:28 AM 5 comments: