In which Primo is reminded that yes, indeed, the tree placed the apple exactly where it wanted it to be as the tree's siblings nodded approvingly

Saturday afternoon, as we are driving to my uncle's memorial fish fry. My sister, brother in law, and aunt are flying into [big city three hours from the fish fry] and driving to [the fish fry] together.
Primo: Where are Jennifer and Matthew staying?
Me: At Angie's.
Primo: Where is your aunt Mary staying?
Me: I don't know.
Primo: What if she's staying at your aunt Rita's?
Me: OK.
Primo: But then someone will have to drive her to [where aunt Rita lives]! That's an hour away!
Me: OK.
Primo: But what if she wants us to do it?
Me: I can promise you that she already has everything arranged. She would not fly from Colorado to [big city] and then drive to [fish fry] without a plan. You do not need to worry about surprise requests. [Engineers hate surprises.]
Primo: I know you are like that. I didn't know your aunt would be like that.
Me: We are ALL like that.

Here's what I wanted to say to my cousin Matt, who is not to be confused with my brother in law Matthew:

Yes! You have hit the nail on the head. This is not about our family at all but about Primo's horrible parents and brother Ted, who expected Primo to take care of them.

What I was really saying here was not so much that I have a great family, which I do - Primo is always commenting how nice everyone is to him, even though their political and religious beliefs are pretty much 180 degrees opposite of his, but that Primo's parents were horrible to me.

But you don't write that in a public forum under your own name. That's tacky.

You write it anonymously on your blog. That's not tacky.
Posted by the gold digger at 4:26 PM 2 comments:

In which I prepare for attending my uncle's funeral, which will be sad but was not unexpected, as he was 81 and had been in poor health for years

The main part of preparing?

I am making a tortilla, the amazing Memphis Junior League hot onion dip, and a zucchini crisp. (We are awash in zucchini.) (I burned the crisp trying to crisp the topping using the broiler, but it was no great loss, as the unburned part did not taste good at all.)

The good thing about making funeral food is that I can tell this Ole and Lena joke and know that my uncle would have laughed at it. 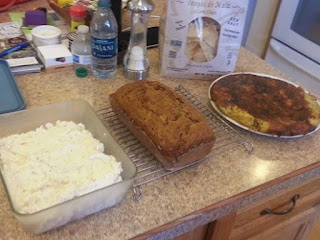 Ole was on his deathbed. Pastor Inqvist had been there to give him the last rites and had left. Ole was lying in his bed, waiting to die. It is very boring waiting to die.

Ole noticed a wonderful fragrance wafting up from the kitchen. Could it be? Could it possibly be his favorite rhubarb bars? His favorite dessert in the whole wide world?

"Lena!" he tried to call, but his voice was too weak and he sounded like the guy in the Man Cold video who croaks out, "Laura!" but she can't hear him.

He spent a few minutes recovering from the attempt to call Lena, then made a decision. He tried to sit up, but he was too weak. Too weak to sit up in bed.

So he rolled. He rolled over out of bed and fell to the floor.

He spent a few minutes resting, then began to crawl, one painful, slow inch at a time to the stairs.

Once he got to the stairs, he rested for a few minutes, then turned around so his feet were facing down and bumped his way down the stairs on his butt, one stair at a time.

When he reached the bottom, he rested, then rolled over onto his stomach and crawled into the kitchen. He got to the island and painfully pulled himself up to the counter, where Lena had cut the rhubarb bars and placed them on a plate.

He reached for one, grabbed it, and was about to take a bite when Lena walked into the kitchen. She ran to him, shocked, slapped his hand, and said, "Ach, Ole! Shame on you! Dose are for after da funeral!"

Preheat oven to 425°. Drain chopped onions in a colander, then squeeze out any excess liquid. Put onions into a medium bowl. Add cream cheese, parmesan cheese, and mayonnaise and mix with a wooden spoon until well combined.

Transfer onion-cheese mixture to a 1-quart soufflé dish, smoothing top slightly with the back of a spoon. Bake dip until top is golden brown, about 20 minutes. Serve hot with corn chips or crackers, if you like.
Posted by the gold digger at 10:30 AM 2 comments:

In which Primo and I are not happy about attending a funeral because 1. funeral and 2. it's just starting because I have a lot of older aunts and uncles

Primo: This is just the beginning. There are going to be a lot of funerals over the next 15 years.

Primo: Maybe I should go back to work so I have an excuse not to go.

Me: Works for me.
Posted by the gold digger at 7:04 PM No comments:

You know how some women want wine, roses, and diamonds?

I am not that woman.

I don't think there is anything wrong with wanting wine, roses, and diamonds, but I don't drink (unless it's Bailey's cut with cream), I prefer tulips and ranunculus, and I don't wear much jewelry.

I like Getting Things Done With No Drama and Without Having To Pay A Repairman.

That's one of the reasons I married an engineer. They can fix things.

I don't swoon over conventional romance.

I swoon over household repairs. Remember when Primo slayed that dragon of a broken washer and a broken dryer?

Ten minutes ago, he walked out of the house announcing, "I am going to the hardware store to get the parts to fix the toilet."

It has been getting really hard to flush over the past few days and he is fixing it now. Now. NOW. Do you know how exciting it is for the person who is married to a procrastinator when the procrastinator takes steps to solve a problem now? 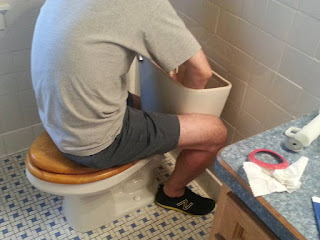 In which there is a discussion of bellybuttons on Ask A Manager, my favorite blog, and I know I am with my people

From the interview AAM did with her cool niece. The niece did not mention bellybuttons; they just came up, as they do.

Posted by the gold digger at 5:30 PM No comments:

Primo: Jack broke up with his girlfriend.

Primo: He said he needs to get his stuff trimmed.

Primo: He needs the male version of a Brazilian.

Primo: Because he's dating again and wants to be ready.

Me: No! Why is he telling you this? What IS it with your family and the sharing of deeply intimate information?