The Candidate's Wife: A neighbor is upset about changes to the hunting rules and wants to take Primo hunting, which Primo thinks would be pandering but I think would be fabulous

One of our neighbors and his wife have helped with Primo's previous campaigns. They are very nice people - they even did the phone bank with us in the first election.

If you don't know what a phone bank is, let me tell you.

then a phone bank is your worst nightmare.

For hours, all you are doing is talking to people who probably hate talking on the phone as much as you do and now you have interrupted them in the middle of the Batters episode of The Great British Baking Show when they are doing the churros and everyone wants to see how the churros will turn out. Everyone.

You do not generate goodwill with people by interrupting them during a TV show they like.

So our neighbors even helped with the phone bank, which makes the pretty exceptional if you ask me.

Let's call them Scott and Zelda.

Scott emailed Primo last week about some changes to the hunting laws. He is not in favor of these changes. I am not going to copy his email here because I respect the privacy of people who have always been gracious with me.

Cross me, though, and I will publicize your jerkiness.

But Scott's email has nothing jerky in it - nothing like that - it's just that he wrote it for Primo's eyes, not anyone else's, and I want to honor that.

He suggested that he take Primo hunting so Primo could see for himself.

Primo is a city boy. 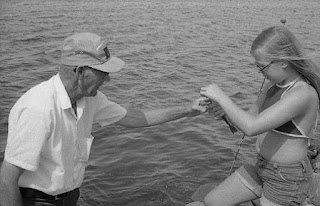 My grandfather took me fishing. He taught me to wean a calf and to ride a horse and let me sit in his lap when he drove the tractor.

We come from very different backgrounds.

My family is almost all hunters; I don't even know what Primo's uncles do because I have never met them and Primo sees them once every 20 years at funerals. Wait. At their own funerals.

So Primo is all, "I can't do that! I'm not a hunter! It would look like I was trying to suck up to voters!" to which I said, "Hello you are in politics now what about this surprises you? That's what politicians do - they pander and they suck up!"

But then I said, "The voters here are hunters. Don't you think you should try to understand what it's all about so you would be better informed and more prepared to understand them and to represent their interests?"

To which he admitted that yes, I was right. (I relish hearing that so, so much.)(It happens so rarely. Not that he won't admit it - he will - it's just that he is right so much more often than I am.)(Of course, he cares a lot more about being right.)

He wrote back to Scott,

Your proposal to take me hunting is very interesting. I've never had a personal desire to hunt or to own a gun, although I have no problem with responsible hunting or responsible gun ownership. (I have done some target shooting, several times with a .22 rifle and once with a friend's Colt .45; after that experience, I can say that I definitely don't have any desire to fire a handgun again.) Goldie and I do eat venison, both from her family's deer processing plant and from a friend who hunts every year.

My initial reaction was that it seemed silly to go hunting just so that I can claim to be a hunter during my campaign, but I talked to Goldie about it and she suggested that it may be something I should experience if I want to represent hunters in the Legislature. I think she may be right! It would be good to be able to say that I have gone hunting, even if I don't choose to identify myself as a hunter on my campaign literature after going hunting just once.

So maybe we'll get Primo out in blaze orange. On verra.
Posted by the gold digger at 7:41 PM 1 comment:

The Candidate's Wife: Ted offers to help with the campaign and I laugh because Ted? Helping? C'est rire

Primo: Ted emailed me to thank me for the note I wrote to thank him for his contribution.

Me: Great. That's exactly why I wrote snail mail letters to your mom - I didn't want her to be able to email my right back. At least with letters, there was a lag time.

Primo: He wants to help with my campaign.

Primo: He could be sincere.

Me: You mean like last time when he put you in touch with his friend who spent half an hour telling you to advertise on facebook?

Primo: That was really useful.

Me: He wants to help?

Primo: That's what he says.

Me: He probably just wants to call you and tell you his opinion on things and have you tell him how wonderful he is.

Me: Tell him to send money and to have his rich friends send money. That's the best kind of help.
Posted by the gold digger at 6:49 PM No comments: