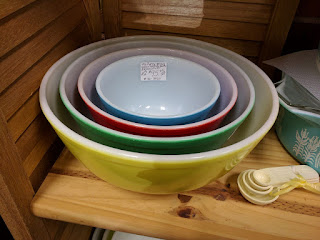 In which Primo is a Bad Muffin Eater 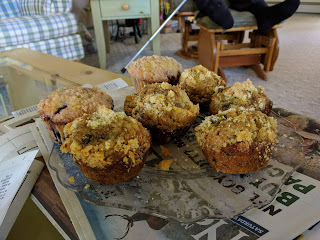 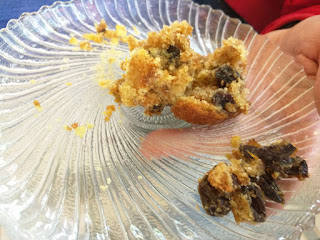 That is what my lovely aunt Pat presented to us when Primo and I stopped in to see her and my uncle Hank. (Hank is my dad's brother.)

Aunt Pat, if you will remember, is the angel who made a pitcher of Old Fashioneds for my dad's going-away party when he was in the hospice. He was less than a week from dying. We have everyone who could come - he was in the hospital 35 miles from the town where he and my mom grew up and where much of my family still lives today - join us in his room at the hospice.

We had a bottle of champagne and Pat's Old Fashioneds - because my dad had said she always did make the best Old Fashioneds - and we talked about everyone he would see in heaven, including his father, his best friend, who had died in a ship's fire in 1967, and our cat. (That's my sister feeding O'Malley in the photo below.) 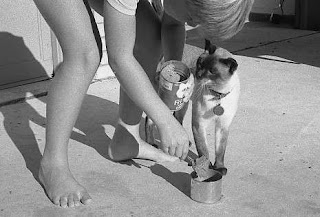 I don't think the death of a 62 year old man who was loved pretty much universally is a good thing, but if you can have a good death, my dad's death was OK. He was surrounded by people who loved him and whom he loved and he knew he was loved.

Aside - my uncle John, who is in his mid 50s, was diagnosed with multiple myeloma a year ago. He is doing well after his bone marrow transplant next month and we are full of hope. But last year, he told my mom, his sister, that if he died, he wouldn't feel cheated. He said he had had a good life with good people and felt as if he had been lucky.

Back to my aunt Pat.

Primo and I went to see her and my uncle. They are a hoot. My uncle used to drive the beer delivery truck to Milwaukee when they were dating and they would go to Milwaukee to visit relatives and go out. I asked if they had read the book, Dirty Helen, a memoir by a madam who had a bar in Milwaukee.

Oh honey. They had been to her bar!

One cannot visit one of my relatives without having food offered to you immediately. You walk in the door and are offered food and drink. You are fussed over and great attention is paid to your comfort.

(Which is one of the reasons I was so confused the first time I met Sly and Doris. I was a guest in their home and they offered me nothing! That was not The Song of My People. We feed guests. It is what we do.)

Pat brought us water and a plate of muffins - blueberry and bran.

Primo, as you all know, doesn't like anything that ends with "-erry," although he will eat tendon and tripe.

So he carefully picked them all out and left them on his plate. (Which is photo #1.) You can see the raisins stacked neatly on the right side of the plate.

"What are you doing?" asked Pat.

I rolled my eyes.

"He is a Bad Muffin Eater," I explained.

"What is a Bad Muffin Eater?"

So we told her the story of how Sly was upset about how I eat my bacon.

She almost fell to the floor laughing.

When we left, she gave us six muffins and two jars of homemade pickles.

Because that's how My People are.

Dang. No wonder Primo was depressed thinking about his parents and the crummy family hand he was dealt.

Below is the sausage my cousin gave us. Yes, that entire cooler is filled with venison summer sausage, breakfast sausage, and bratwurst. I think those are some of their hot dogs as well and of course there is venison bacon.

I won the Family Lottery. Not because they give me stuff, but because they are kind, thoughtful people whose presence enriches my life.

(The cousin who gave us the sausage? She is the one who drove 70 miles round trip to the hospice when we were staying there with my dad in the last few days to bring us supper. That's the kind of people I have in my family. Man. I am so, so lucky.) 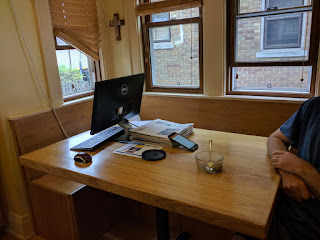 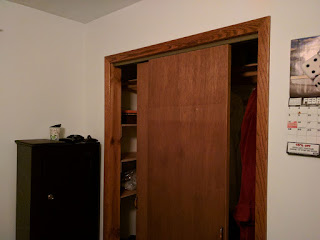 OK. I lied. I didn't just discover this.

I have known it for years.

It bothers me, but not as much as it bothers Primo.

In which Primo admits I AM RIGHT 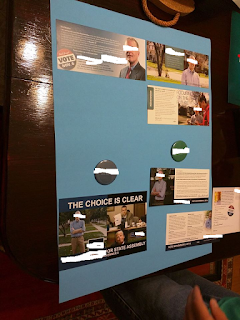 Primo: You were right about the white space.
Me: I know.*
Primo: It takes me a lot to admit that!
Me: It shouldn't.

Primo: But I am my father's son. Other people can't be right. Only a [Sly's last name] can.


* Primo, in true engineer fashion, wanted to bunch everything up in the center. I am not a graphic artist, but I do have a better sense for these things than Primo does. He spaced things out a little more, but still not enough for my taste. I take my victories where I can, though.

** It's for a political event that happens in two hours. That he has known about for three months. For which he bought the posterboard and the frame last night. And started assembling two hours ago. At least he didn't leave it to the last minute.