It was along the lines of, "Dude! Did you read the email I sent you earlier this week?" only he threw in some Spanish, which Primo does not speak (and I was too busy rolling my eyes to catch and I didn't care to listen to the message again).

It was this forced casual, "Hey! I want more money! Send it now!" with forced joviality, as it appears Ted has recognized that Primo cannot be bullied. Or maybe he is saving that for later? I don't know.

Then there was something about happy Easter, he guessed, only he and TedsWife don't celebrate Easter so whatever. As in, those stupid people who do celebrate Easter. The king is dead, long live the king of disdain for anyone who is so stupid not to be as enlightened as Ted and Sly.

Primo is dreading the showdown, but there are a lot of things that need to happen - Primo needs to finish our taxes, he needs to get the information to the accountant for Sly and Doris' taxes, and he has to campaign for his candidate of choice - before he bothers to send Ted more money. Ted might not be able to fund his IRA with his son's money. Oh. No.
Posted by the gold digger at 8:00 PM 4 comments:

In which Ted does call, as he has threatened, but Primo does not answer the phone

The email from Ted offering Primo the once in a lifetime - well, twice in a lifetime - chance to serve Ted by being a trustee for TedsSon - the experience so far has been SO FABULOUS as Ted is a treasure to deal with - came Thursday morning.

Primo did not answer right away because he was busy and he doesn't want to deal with Ted and honestly, sending Ted money so he can fund his IRA RIGHT NOW is not a priority for Primo.

The email did, however, prompt Primo and me to wonder why someone would pay to remodel his house before funding his IRA and how it is that two adults, one of whom purports to be very well educated and the other who has actually been carrying the financial burden of supporting her family because her husband will not get off his ass and find a job, two adults, who, although they have a mentally handicapped child, have gotten tens of thousands of dollars in financial support from all sides of the family, cannot fund their IRAs without outside help.

You pay the bills first, right?

You fund your retirement, you pay your bills, and then you remodel your house. Admittedly, remodeling the house to reduce your energy bills is not a bad idea, but did I mention that Ted is taking his family on a European vacation this summer?

A European vacation is definitely a financial priority for fiscally responsible folks who have not funded their IRAs.

Ted emailed on Thursday. Primo did not answer.

Ted calls on Saturday. Primo does not answer. Primo has Things to Do. Being at Ted's beck and call is not on his list of Things to Do.
Posted by the gold digger at 2:21 PM 6 comments:

In which Shirley is so, so sad

It's really hard to catch her in the act - the photo below is a rare sighting. We will hear this desolate, muffled yowling in the basement and then the binky will appear someplace random - on top of the stairs, in the kitchen. She holds it in her mouth, carries it, and cries. We have no idea why she does this. 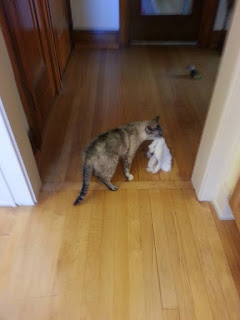 In which Ted, who we think has been abandoned by his best friend because TedsFriend probably got tired of Ted's BS, offers Primo the great honor of being even more involved in Ted's life and doing even more work on Ted's behalf and Primo does not want to do it

1. Ted wants Primo to be trustee for the other trust for TedsSon

2. Ted wants more money so he and TedsWife can fund their IRAs before April 15 and remodel their house, which of course is the purpose of the trust for TedsSon, who is mentally disabled and will never be financially independent

1. How are we looking on timetable for TedsSon's education reimbursement from Dad and Doris' trust? Among other things, we’d like to stick as much as possible (in our names, as he can’t have a balance of over $2,000 of any assets) in our respective IRAs by April 15. Plus we’re fixing up the house a bit (high R-factor insulated siding).

2. For several reasons, TedsWife and I would like you to be TedsSon second Trustee, after TedsOtherHalfBrother, replacing TedsFriend*. Your dedication, coolheaded-ness, and, family devotion never was more apparent than within the last year. All in all, we’d like to keep everything in the family.

Yeah. That. Primo and I suspect that TedsFriend has finally said, "Ted, you are a pain in the neck. I will continue as trustee, but not for free any more. You will need to pay me."

And Ted probably sputtered because it is such an honor to do a favor for Ted!

* Months ago, TedsFriend told Primo that he was taking a break from Ted. We think the break might have become permanent.

In which Primo goes to California to see his stepdaughters and their families and has lunch with his former co-workers, who tell him about open jobs at the company

Even though it has now been 18 months since Primo quit working for a year, I am not as concerned as I was. I know he does not want to return to the kind of work he did for 30 years, but if he cannot find a job elsewhere, it is nice to know it is an option.

Nope. I am not particularly concerned that he be fulfilled with his work. I like my job, but it does not satisfy my deep yearnings for recognition and a feeling that I am Making the World A Better Place.

That's what work is for.

Primo can work for money and volunteer to Save the World. It works for me.
Posted by the gold digger at 12:30 PM 2 comments: