Remember The Other Woman? Who told Primo she was going to primary him? Other Woman - henceforth known as OW - was encouraged to run by the wife of a current state house representative (CSHR) whom Primo knows. The wife also knows Primo and is an elected official herself. I am not a big fan of CSHR, but he has never struck me as malicious and underhanded. Just kind of arrogant. And his wife has been lovely every time I have met her.


Primo: I talked to [our political mentor/Big Guy/friend]. He is pretty sure that Wife of CSHR did not suggest that OW run against me - that OW came up with that idea all on her own.

Primo: Plus I just made a $50 contribution to CSHR's campaign and he thanked me publicly on facebook, posted a photo of him, his wife, and me together, mentioned that I am also running for the State House, and linked to my campaign page.

Me: That is the action of a complete sociopath or of someone who is not encouraging OW to run against you.

Primo: Nope. Plus, when I spoke to [our political friend], he said that he has spoken to [the Republican incumbent holding the seat Primo will be running for] and he said that Incumbent said that the people who want to run for that seat on the Republican side are crazy and if a Dem might win, he would rather have me because he knows I am reasonable.
Posted by the gold digger at 3:12 PM 1 comment:

The Candidate's Wife: Is that a dagger I see behind me?

Me: Let me summarize this for us. She basically asked, "Primo, would you sharpen this knife for me so I can stab it in your back?"

Primo: It's not that bad!

The Candidate's Wife: The challenger, again

Primo: I think I might have convinced her to run for the state senate instead. Then we could run as a team.

Me: That would work.

Primo: Maybe. She doesn't know anything about running. She didn't even know you have to file and have to collect nominating signatures.*

* Which is something that makes me nuts on TV and movies - they show someone deciding to run for office at the last minute and voila! On the ballot! That's not how it works!
Posted by the gold digger at 6:38 PM No comments:

The Candidate's Wife: And now someone comes out of the blue to have coffee with Primo to tell him she thinks she is going to primary him

I just got home from work. Primo just got home. He just had coffee with a woman he knows from an grassroots group. She has never run for office before and decided that the time is now so she thinks she should run against Primo in the primary.

And what does Primo think about that, she wants to know.

Primo is calmer than I am.

I am not all about taking turns in politics and may the best person win, but seriously? Out of nowhere, she's decided that she should run against Primo in a primary?

Because we need more women in politics? And a woman version of Primo - because ideologically, they are probably pretty close - is preferable to Primo?
Posted by the gold digger at 2:54 PM No comments:

The Candidate's Wife: I couldn't find The Cat 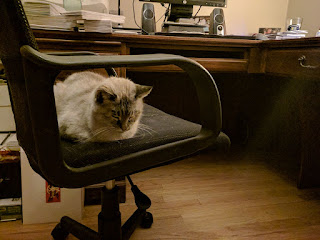 When you are about to leave for your husband's campaign launch event and you can't find the cat and your husband thinks you let her into the closet and you look under the other cat but she isn't there and then you find her in your husband's office, which means he is the one who left a door open that should not have been open. #LookUnderTheCatFirst
Posted by the gold digger at 6:41 PM No comments: