In which Primo is torn about which candidate to vote against

Primo: So I'm not sure who to vote for in the state party election.

Primo: One of the candidates tried to get another candidate kicked out of the party. But his opponent is a transsexual who used to go places, like the bank, throw up her shirt, and announce, "I finally had it done!"

Me: I can see why that would be a tough choice.
Posted by the gold digger at 6:08 PM No comments:

My friend Bruce told me that he was thinking of running for office. He owns his own business and is quite successful. He is financially secure, although some of that is due to sad circumstances: he was the sole heir when his grandfather and then his mother died. I think he'd rather have them around than have their money, but you don't get to pick these things. Nobody asks, "Would you rather your parents be dead and have $500,000 or would you rather they be alive?"

I would rather have my dad than have money. I would have been very happy to have had my dad around for the past 16 years. I didn't even get money in compensation, not that money can make up for the loss of your dad. It sure would be nice for Primo to have been able to meet him and for him to visit and hang out and do house and car repairs while he was here.

Oh I didn't take advantage of him. That's just how my dad rolled. He liked to fix things and he liked to stay busy. He came to see me once in Austin. I took him to my friends' lake place where they kept their boat. There was a problem with the lift or something and my dad was as happy as a pig in mud that he could diagnose and fix the problem.

A lot of my formative ideas about what makes a man are based on my dad. (Naturally.) And the idea that a man should be able to fix things comes from him.

My dad was an equal-opportunity dad - he believed women should be able to fix things, too, which is why he wouldn't let me get my drivers license until I could change the oil, change a tire, and change a belt on the car. I mean, I had to do all these things so he could see me doing them.

One gift bequeathed to me from my dad is the old Better Homes and Gardens (I think that's the publisher - I am too lazy to go upstairs to look) book on home repairs. I have used it - it is very useful to be able to fix your own running toilet or clear a clog in the kitchen sink.

How did I get on this subject?

So my friend Bruce is thinking of running for office.

I told him not to do it - that it was an insane idea and he would not get to see his family - he has two young children - for weeks, if not months.

"My wife is not excited about the idea, either," he said. "She said that if I need to do this - that if I have a strong spiritual need to run for office, that she will support me, but if it's just a mid-life crisis, she would rather I have an affair. Or buy a car."

"A Corvette is OK. A Porsche is not."

Primo: I was arguing with Potsie last night about the Polka Dot candidate for governor. He thinks she's our best option but he's pretty sure she won't win.

Primo: Rather than accepting it, he should be working to get someone else elected! If the current [Stripes] governor is re-elected, the state will  become even worse, with all the Stripes agenda. If that happens, I will have to consider moving out of the state.

Me: Cool! So we can go back to Texas or Tennessee?

Primo: No! They're even worse! I'd have to go to Minnesota.

Me: I am not going someplace that's even colder than here.
Posted by the gold digger at 6:21 AM 1 comment: 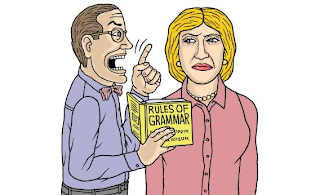 So Primo is going to print the article and the cartoon and show it to Doris the next time he visits. We can try to make her smile somehow.
Posted by the gold digger at 3:53 PM 6 comments: