The Candidate's Wife: My friend Amanda, who is lovely, volunteers to help with Primo's campaign

Amanda (via messenger): You can tell your honey that he has an unreliable campaign lackey; that I intend to volunteer how/whenever. But I will need the campaign pitch, stance, and script to learn. I am excited to help despite living one block south of (the district).

Me: Great! I will tell Primo. Primo, listen.

Primo: It's a little more than a block.

Me: It doesn't matter.

Primo: The district ends on Oak Avenue and she is --

Me: She's either in the district or she's not. That's all that matters.

Primo: It's useful for me to explain exactly where the district ends.

Amanda: Tell the engineer that the north boundary of my apartment complex ends on W Pine Drive... which is ONE UNINTERRUPTED BLOCK from Oak Ave. So

Wow. She totally gets him.

Posted by the gold digger at 9:10 AM No comments:

The Candidate's Wife: Making pie for America, or, What's my favorite cookie recipe? 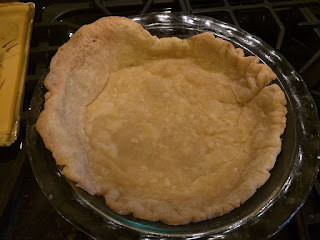 This is a non-partisan rant.

I don't think spouses are relevant to politics. That is, I don't think they should be. Who cares what the spouse - and let's be honest, we are talking about wives here because even though women are half the population, we are under-represented in the political realms of power - wait - in the realms of power everywhere - who cares what the wives think?

I do not care.

I don't care what the husbands think, either, although it's so rarely a husband. So, so rarely.

I don't know. Running for office is a pain in the neck for anyone, but it seems like women are criticized for things that men are not. Do they talk about men's hair and clothes? I don't think so.

Notice to the media:

1. I don't care what the spouse's political opinions are because I am not voting for the spouse

2. Unless the spouse has a Magic Cookie recipe that will make my ass look like I am a 17 year old Playboy model and will clean my house while I sleep, I don't care about the cookies.

Fortunately, nobody at all cares about the wife at the level of office Primo is running for. Actually, I think the wife comes into the picture only at the presidential and maybe the gubernatorial level. I'm not seeing either president or governor in Primo's future - even if he is elected, he cares about crafting policy, not about being an executive. And if there were some strange future where he would be on either of those paths - a strange strange future indeed, maybe the world would have changed by that point to where voters (or readers of the tabloids and the gossip columns) don't care about The Wife.

I would hate it. HATE IT!

But the thing, I think, that I would hate the most would be being reduced to an accessory and asked stupid questions like, "What's your favorite cookie recipe?" No wonder Hilary boiled in rage at that question. It was so dismissive. It was dismissive of everything she had accomplished as a human being and it reduced her to being an appendage who existed to do nothing more than support Bill.

Witness the photo above.

I thought, I don't need to use weights for blind baking this crust! I blind bake tart crusts all the time without weights.

Which is why you get the above.

How do you think that would go over in an interview with Ladies Home Journal? "Hi! My husband Primo is running for office and this is my pie!"

The Candidate's Wife: The Wild and Crazy Saturday Night of a Politician and His Wife 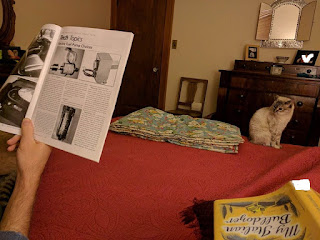 This is our Saturday night.

Primo, the cats, and me, and our magazines and books.