In which I remember that I have not told you that Keith's awful former tenant, whom I would name here so her future landlords could google her, but I won't because not because I fear her finding me - the truth is absolute defense, right? - but because I do not want to identify myself, even though several of my brilliant readers have already figured out who I am IRL, which is fine as long as they use their power for good, cashed the check for the partial deposit so we may be done with her

Keith packaged the returned mail, not opening the envelope, and we wrote a letter to include with the new package, certified mail with return receipt.

I am once again sending you your deposit letter and the balance of your deposit. As you can see, the original letter was mailed on May 20 to the address you gave me,

That letter was returned to me today with a note from the addressee indicating “Wrong address?” and a “return to sender” notice from the Post Office.

I am re-sending the letter to you at the address you indicated in your recent emails with delivery confirmation.

He got it back on Monday. We prepared everything Monday night and he took it to the post office on Tuesday.

On Thursday, she was emailing him that SHE STILL DID NOT HAVE THE DEPOSIT AND WHERE IS HER MONEY?

He called me, worried.

"Panic not," I said. "You have proof. She will get it. The post office delivers the mail."

We decided he would not email her at all.

Can't say I blame him. She has been nothing but nasty to him.

On Monday, he called me.

"I checked with the bank," he said. "She cashed the check."

It's been two weeks now - I think - since she cashed the check - and she has not sent any nasty emails to Keith or called him or dropped any letters off at his house.

Maybe we are done?

I want the good guy to win for once.


Posted by the gold digger at 6:39 PM No comments:

Me: Sure. Because you have felt compelled to do so in the past eight years since we moved into the house?

Primo: It could happen.

Primo: It could! And don't you think I need to simply my life?

Me: Yes. And I think you start by putting that book in the library box.


Related - tonight, while he is making supper -marinating the venison that our friend Brian gave to us.

Primo: Hey! Where's that chili sauce I used to use for marinating meat?

Me: I think I threw it away.

Primo: You didn't consult me!

Me: We moved it from your apartment to the house eight years ago.

Me: It was OPENED when we moved.

Primo: I thought you said that kind of thing doesn't go bad.

Me: Yes! Before it is opened! But I don't think it's a good idea to eat food that has been opened for over eight years, do you?

In which Primo suggests that I help him get rid of books and claims that he is really committed to the project, as he already boxed up a bunch of materials from the place he quit working at over 18 months ago and although he is not prepared to throw the box away, he is willing to move the box from his office to the basement

Primo had suggested I help him and I told him no, he could go through his books just fine on his own and make decisions.

He said he wanted help.

I said he didn't need it and that I had no interest in watching him work - that I had plans of my own for the evening.

Oh! Let me ask you something.

If your husband tells you that he will be gone all evening at not one but two political events and that he will not be home before you go to bed because after the political events, he plans to go out to karaoke, and you make your plans to get cozy with your stack of library books and then he comes home at 8:00 p.m. because he "stayed too long at the first political event and there was not enough time to drive the 90 minutes to attend the second one" and he has stuff to do at home anyhow, does that mean you are obligated to change your plans?

That you are obligated to surrender your evening of what you had planned to be blissful solitude to have some Togetherness with your husband?

So I was not happy at the idea of helping Primo get rid of books, although of course I totally support the idea in principle. I just wanted him to do it by himself.

Me: Why don't you go upstairs and get started? Pull the books you are sure you don't want and then, after you have made a first pass, I will come up.

Me: Why? Either you want a book or you don't.

Primo: You know I don't make decisions like that!

Me: Then how do you make them?

Me: That does not sound very efficient. 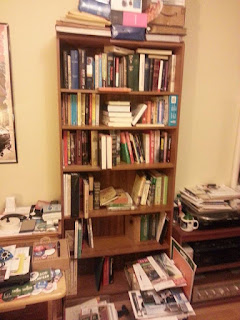 This photo is a little shaky because Primo was all "Wooo!" because I was you know, standing by HIS STUFF and maybe TOUCHING IT. He got all panicky and I got annoyed. I took it after we spent 30 minutes pulling out books and tossing them in the "To Donate" pile. Thirty minutes of culling and yet it is still almost full. 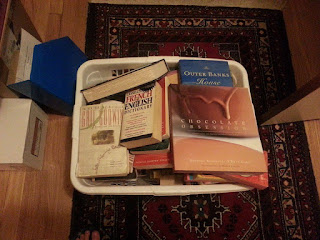 This photo is better because it was in the hall and it's harder to touch his stuff from the hall.

In which Primo and I argue about what constitutes Giving Back

Primo: This guy is just retiring and is running for office. His wife is not happy.

Primo: Their kids live in [the capitol city] and she drives there a lot to babysit. She wants to move there.

Me: To be a free babysitter?

[I have no children and my bonus grandchildren are halfway across the country, so I clearly don't Get It.]

Primo: He said no - that the community had always been good to him and it was time for him to give back.

Me: Running for office is not giving back!

Primo: Yes it is!

Primo: Yes it is!