The Candidate's Wife: Primo gets some tough love about campaigning from a legislator friend

One of the things Primo hates the most about running for office is the feeling that he is bothering people when he talks to them about running. He doesn't mind talking to strangers when he is at a political event or when he is knocking on doors, but he is very uncomfortable talking about himself and about the campaign if he is at a non-political event, like a block party or a church youth group fundraiser. He doesn't want to bother people or intrude.

I tell him that if he is comfortable knocking on someone's door and interrupting them AT HOME that he should be fine at any other gathering.

At the least, I tell him, wear a campaign button!

And go to events in our district!

I am not the only person telling him this.

He got an email from a friend of his who is a representative. This friend - we shall call him Hamilton, although that is not his name - is echoing what other friends are saying, which is that Primo is spending wayyyyy too much time helping other people in their events and not enough time in his own district campaigning.

I write with love and support, but I do need to share a few things that aren't easy to say - and a few ideas that I think are really great.

[*That is the part Primo hates!]

The political circles know you, they support you.  You support them back, which is good, but unless you're raising money by going, you gotta stay back in the burbs and connect with voters.  Example: Becky is a friend, you support her, that's all good but there is no cross over between her district and yours.  You can also rule out getting money from her, as she's running too...so, on balance an evening event like that needs to become less of a priority.

I say the same thing about my own fundraisers coming up.  Don't come to my events, stay in district and connect as best you can.  Obviously there won't be events every night but you get the point...

Now, the [PAC] event is a room where you can get money.  If you go to an event like that you've got to bring lit/business cards and make a hard ask from some of the political folks there.  Mike and Steve can each direct thousands to you.  They'll tell you that they can't do it this early in the campaign cycle, but you need to ask.  You need to stick your hand out and say "I'm going to win and I need your support.  How much can you contribute?"**

[**Also torture for Primo and, I think, for most normal people.]

"But how do I work a room?" Primo asked me. "How do I go somewhere where I don't know anyone?"

I have no idea. I am also not a room worker. Nothing fills me with more dread than having to enter a room of strangers and there is almost nothing I would rather do than be at home by myself or with Primo and the cats and some books. I don't enjoy being around other people. It's torture. And it's boring.

Guess what? Hamilton is also an introvert. Campaigning is torture for him, too. He has the added challenge of not being the same race as almost everyone else in his district, so, as he told Primo, he really stands out.

But he does it anyhow.

His rules are simple:

He goes to the events.

He makes sure to meet the organizer.

And he talks to at least three people he doesn't know.

Then he lets himself leave.

He gave Primo a formula.

Primo is an engineer. He loves formulas.

And we went to the church youth group fundraiser on Friday. We sat at a table of people we did not know. Primo met all three adults at the table. And he talked to them. And it actually came up organically in the conversation that he was running for office and THEY WERE INTERESTED.

The Candidate's Wife: People give Primo their hard-earned money and he wants to be worthy of them

You guys, we are so grateful every single time someone sends Primo a campaign contribution. This one came with a really nice note: 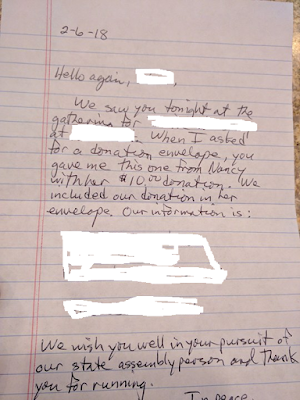 Posted by the gold digger at 11:47 AM No comments: