Only we are not on vacation any more, so we are very, very sad. I wish we were the kind of people who can be on vacation all the time. We are not. We are people who have to work. 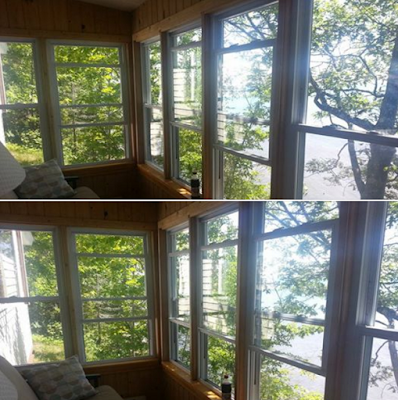 I think I would be such a better rich trust fund brat than the ones who get hooked on cocaine or make sex tapes that become public. If I didn't have to work for a living and could do whatever I wanted, I would stay totally under the radar. Nobody would know my name, not even for Good Works. Any Good Works I did would be anonymous. Well, donations of money. Good Works done in person are hard to keep anonymous, but I would try. I really hate having my photo taken and can't imagine I would feel any differently about it if I were rich.

The other thing I would do if I were rich would be to spend a lot of time at this cottage, the place we have been going on vacation for several years now. I think I could spend every day of the rest of my life sitting in that sunroom, reading and listening to the waves crash on the shore.

Of course every day, Primo would have to come in after me to adjust the windows. Do you see the difference between the first and second photos?
Posted by the gold digger at 12:00 PM 4 comments:

In which I get Primo to concede that my brother using Too Many Paper Towels! is not the worst thing in the world and I remind him that his parents stayed in our house for nine days in our bedroom and I had to suck it up

Primo was ultra cranky when my brother was here, as I mentioned, but I wanted him to get the heck over it. But, sadly, Primo had already reached Bitch Eating Crackers stage and was not to be reasoned with.

However, he saved his crank for me. He did not show it to my brother. Instead, he whispered to me, when my brother was out of the room, "He's using too many paper towels!"

This was after he had complained that Greg had merely rinsed the spoon he used for adding sugar to his tea instead of scrubbing it with soap and water until he finished singing "Happy Birthday" and that Greg had covered his food with a paper towel instead of using the piece of wax paper that we leave in the microwave and that my brother had no way of knowing about.

Let me give you some background.

Greg has not always been a good houseguest. At my mom's, he used to leave his stuff all over and sleep until noon and then make himself something to eat but not get his dishes to the sink. He didn't help make dinner, didn't make his bed, etc., etc., etc. My sister and I would fume, but what are you going to do?

Since then, my brother has gone through an amazing transformation and has become The Best Houseguest In The World.

1. He conformed to our schedule
2. He offered to go to the store to buy milk - with his money - when it looked like we were almost out. We weren't - Primo and I don't go through milk that fast but we love a bargain, so we buy a whole gallon and then freeze it in quart containers. My brother did not know there were frozen quarts in the freezer.
3. He kept all of his stuff out of the guest bathroom.
4. He kept his room (relatively) tidy. (Compared to when he was a kid.)
5. He hung up his towels, which he has always done, but we have had houseguests who left their wet towels on the floor, which made me wonder what on earth? Who does that? In someone else's house?
6. He tried to wash his own dishes but Primo hates how anyone else does dishes.
7. He covered the food he put in the microwave.
8. He offered to take us out to dinner and then he did so.
9. When he and I went to the state fair, he bought half the food we ate.

More background: My mother, God love her, is as much of a control freak as Primo is and likes her dishes washed a certain way, a way that is not how either Primo or I do dishes. If I do dishes at my mom's, I do it her way if she is watching and my way if she is not.

My mom gets anxious if someone else is doing stuff in her kitchen and will correct a person.

I don't like that kind of correction - that feeling that someone's paper towels are more important than I am, so I make a conscious effort in my house to let people do as they will, even if it's not how I like it.

So when Primo complained about the paper towels, I said, "Even if Greg is using too many paper towels - let's say he uses four paper towels a day, that's a total of 16 paper towels for four days. I can live with that."

I continued, "Besides, when your mom and dad were here, they were horrible guests. They stayed nine days in our bedroom and you were working and I was stuck with them! You do not get to complain about my brother, who is an excellent houseguest!"

"You can't talk about my parents! You can't bring them into the discussion! The statute of limitations is done on them," he replied.

"But they're dead," he answered. "So what they did doesn't count any more."

"It does," I muttered under my breath.

"But I am sorry I have been cranky about your brother," he said. "I am cranky about the election, not about him."

And then he was cordial and chatty with Greg and we all lived happily ever after until Greg left on Tuesday.

My brother is here on his way back home after my uncle's memorial fish fry last week. Greg rode up from Texas and is visiting us on the way back.

It is fine with me - but it is an unscheduled, surprise visit.

Which is hard for Primo.

1. Primo hates surprises +
2. He really doesn't like houseguests because he likes doing things His Way and really, so do I - we are both cranky old people who don't want anyone on our lawn +
3. It is the weekend before the primary election. A lot of Primo's friends are running. The primary is what matters because most of these races are in districts where the opposition doesn't even bother to run. If the candidate wins the primary, she runs unopposed in November.

Plus Primo is annoyed that Greg is getting his own food. "When T visited," Primo said, "I asked him if he wanted breakfast or lunch and then I made him something."

"Yeah," I said, "but I am not interested in orchestrating or preparing meals for three people. If it's breakfast time and Greg wants something to eat, I am quite happy for him to get what he wants out of the fridge and prepare it himself."

Primo is totally uncomfortable with this and I have been trying to figure out why. I told Greg to help himself to what he wants. I say that to all of our houseguests. But usually, people don't do it. Your siblings, though, will do it.

Primo thinks this is odd.

But then I realized that Primo has never had what I consider a normal adult relationship with a sibling. His sister died almost a decade ago and even when she was alive, it was not what anyone would consider a healthy, normal relationship: she would expect Primo to drive her to a bar or someplace where she could buy drugs and then want him to sit in her room with her and listen to heavy metal and get high. He felt guilty about being the healthy, employed child and about living far away from his parents and his sister, so he would grit his teeth and do what she wanted.

He has never stayed with either of his two half brothers, either at their homes or together at Sly and Doris'.

I have stayed with my siblings, both at their homes and at my mom's. Siblings can do things other people can't and you don't think it's weird. I got pissy when Primo's friend from high school started going through our cupboards, but it would not bother me (much) if my brother or sister did it. If they did it, I would just ask what they were looking for so I could help. When Primo's friend did it, I was seething with his violating a boundary that I had not invited him to cross.

BTW, my brother has covered his food before he puts it in the microwave. He has washed his own dishes. He has kept the guest bath tidy and is not leaving his stuff all over the place. He is a good houseguest.

What about you guys? Are the rules different for siblings from regular houseguests?
Posted by the gold digger at 9:13 AM 9 comments: