In which a friend Primo has known longer than he has known me and who is a mutual facebook friend asks if I make up the dialogs I post and Primo says Yes, some, and I say, Nope they are all true

I do not make stuff up. Ever.

Me: Are you going to finish the laundry?
Primo: What do you mean?
Me: There are still clothes on the drying racks.
Primo: I've been bringing them up bit by bit.
Me: If only there were a device that would allow a person to transport multiple items of clothing in one trip. We could get rich inventing something like that.


* Could I have made up Sly and Doris?

I don't think so.

Along those lines - at the church festival where we saw Jon, the friend in question, last night - we went  to see his band perform, I met another bar friend of Primo's. I heard his life story (I asked) and people, I could not make this up. It was so sad and made me hope that life gets better for him.

This guy - let's call him Job - is 60 years old. His wife died eight years ago at the age of 42 from early-onset Alzeheimer's, which they diagnosed when she was 35.

They diagnosed it because suddenly, they had no money in the bank and the bills had not been paid and the credit cards had been run up because their 14 year old daughter had stolen money from her mom to fuel her heroin addiction. Job had to figure out what was going on and that's when he discovered his wife had not been paying the bills.

Job has no money to put his wife in a nursing home. He cares for her, including changing her diapers. She is still strong and frequently violent. After she tears the toilet tank out, he finally tries to put her in a home, which costs, btw, $6,000 a month, an amount that should come as no surprise to any of you who have dealt with any of these kinds of issues.

She kicks out the window of the ambulance transporting her to the home and then assaults an attendant at the home. So they return her to Job.

In the meantime, his daughter is hanging out with gang members. Job goes to her school and calls the police but there is nothing anyone can or will do. He tells her to stay away and she says she will do what she wants. He gets frustrated and slaps her, trying to literally slap some sense into her, and she calls the police. The police come and investigate and make him leave the house for the night but do not press charges because, according to Job, there is no sign of abuse.

"I'm a big guy," he says. "If I had wanted to hurt my child, I could have. I just wanted to get her attention."

Daughter continues to defy dad. Prostitutes herself for heroin. Gets pregnant. He calls police to have her arrested so they will put her into a rehab program.

Other daughter has a five-gallon jar in which she has been saving pennies. Pregnant daughter has the baby and then steals her sister's jar of pennies.

And on and on and on. "I don't know if my daughter is alive or dead," Job says.

In which Primo claims that his clutter is OK because other people are far, far worse, which is true, but it does not make me any happier, as I think the only acceptable status is no clutter 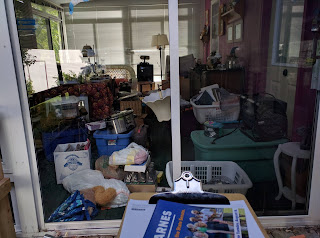 Primo messaged this photo to me and said, "See? Other people are a lot worse than I am. So my clutter is not so bad. It's OK."

To which I said, "Nope. There is no acceptable level of clutter."

Primo: Yes, there is. You grew up with no clutter and I grew up with almost hoarders. The happy medium is between those two.

Me: No. There is no such thing as a happy medium in this case. There is right and there is wrong and your way is just wrong. No clutter is the only way.

Primo: But I am so much better than my parents!

Me: But you are still wrong.