The Candidate's Wife: The story about the Opponent is on the news but they don't mention that Primo is already running in the race

Primo: [Campaign manager] just called me. They had it on the news that [Opponent] is running.

Primo: Well, [Opponent] already holds a state office, so it's news, I guess. They didn't mention my name at all.

Primo: [Campaign Manager] says I still might get some media calls.

Me: That would be good.

Primo: I am not supposed to say [Opponent's] name or refer to him in any way.

Me: That's what Ruthie told you when we saw her in Houston!

Me: She was the campaign manager for that person for school board. When you were telling her about your campaign, she said, "That's the last time I ever want to hear your opponent's name* cross your lips. You never ever ever say it out loud again."


* Actually the incumbent, but the point remains.

Posted by the gold digger at 5:11 PM No comments:

The Candidate's Wife: Primo gets an opponent

Primo: Whoa! This just got real!

Primo: No! He's on the other side!

Me: Oh - I thought you were being primaried.

Primo: No! He's on the other side. And he's AWFUL! This is GREAT!

Me: What makes him awful?

Me: Not the incumbent?

[NB The incumbent is running for a higher-level seat this election.]

Me: Wait. The person who holds the seat currently is not endorsing the person on his side who is running for the seat now?

Primo: And you know what else? [Nice Political Mentor Guy Who Knows Everyone] said he thinks [Incumbent] would rather have me win that seat than the guy on his side.

Me: He would rather have someone from the other side win than this guy?

Primo: Well, he would rather have me win than this guy. But yeah. He does not like this guy. [Political Mentor] says that [Incumbent] likes me.

Me: Why wouldn't he? You like him. He's a nice guy.* You just don't agree with each other.

The Candidate's Wife: He married the wrong woman 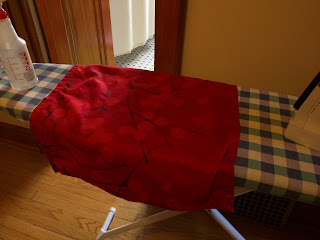 Primo: Hey! How come you are ironing those napkins?

Me: Because they look nicer when they are ironed.

Primo: I thought you were against ironing.

Me: Not against ironing napkins.

Primo: How come you don't ever want to iron my shirts?

Me: Because I am against ironing other peoples' clothes.

Primo: But shouldn't you be interested in ironing my clothes?

Me: You should have married an ironing woman instead of a golddigger.
Posted by the gold digger at 10:37 AM 4 comments: