The Candidate's Wife: The sad life of fundraiser food 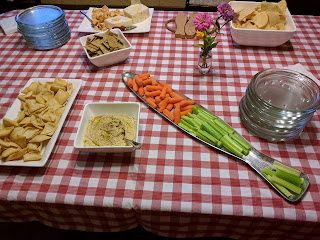 You know how the movies present Las Vegas as so, so glamorous, full of beautiful, well dressed people?

But then when you go there - not really because you want to (you got an A in probability and statistics in grad school, so you know that gambling works for you only if you can count cards, which you are not smart enough to do) but because you are driving to California and your friend will be in Las Vegas and invites you to spend a night with her and you want to see her - you discover that Las Vegas does not consist of crowds of people who all look like movie stars but crowds of people who look like - and this is no disrespect to bingo or church potlucks, but - the folks you see at bingo or the church potluck or a Friday night fish fry or a PTA meeting.

That is, they are all very very ordinary looking people and ordinary people are not glamorous.

I am an ordinary person. I am not glamorous. Ever. My claim to fame at a church potluck is I can cook. (I am kind of competitive about it.)

But I am a frumpy middle-aged Midwestern lady and I look like it. Not glamorous. I don't have glamorous genes, coming from a long line of frumpy Midwestern ladies.

Before Primo got involved in politics, if I ever thought about politics and fundraisers, I suppose I thought about them as elegant, glamorous events, not unlike the fundraiser for the symphony or something that I attended when I was working in Miami and the person in charge of investor relations at work had a ten thousand-dollar table and asked if I wanted four tickets (for free) because he just didn't feel like doing all the work to fill it.

That was an elegant fundraiser. People wore evening gowns and suits. I bought a long dress. (At consignment.) The food was divine - there were sushi stations and caviar stations and waiters offering fancy little canapes and drinks and that was just the appetizers. I can't remember what the main meal was, maybe because I ate so much of the appetizers. The dessert was some fancy chocolate construction that impressed the heck out of me and tasted delicious.

That was my idea of a fundraiser.

Then I started going to political fundraisers with Primo. (Like - very occasionally. If I thought I would see people I like there. Not because I wanted to hear political speeches. People! NOBODY WANTS A SPEECH! KEEP IT SHORT!)

And the food was OK at some of them. There is one guy who has barbecues in his back yard - he hires chefs who know what they are doing. BBQ, beans, corn on the cob, coleslaw, cobbler. It's pretty good.

But mostly, the food is Costco food trays.

Let me re-state that.

If you are lucky, the food is Costco food trays.

Sometimes, it's not as fancy as Costco.

As in, there is absolutely nothing glamorous about political fundraisers, not even the food.

In Primo's first campaign, we had a fundraiser at our house. I decided I was not going to feed people Costco food trays - that I would make really good food. (Ah, we were so naive then)

I made (if I can remember) Ro-tel dip, tortilla, Memphis onion dip, hummus - what else? Probably not much sweet stuff - people don't eat sweet things so much when they are drinking beer or wine.

It took me days.

We raised enough money to almost pay for the wine.

Not that we had bought wine just for the event - this was wine Primo had brought from California and was part of the collection in the basement. But at some point, Primo had bought that wine.

So yeah - we turned wine into some money but not very much.

Everyone loved the food - said it was the best fundraiser food they had eaten.

And - we raised not very much money.

So my new motto is, "No cooking for fundraisers, especially fundraisers for someone else and fundraisers that are being held in my house on a worknight when all I want to do is watch the rest of the Great British Baking Show and then go to bed."

For this fundraiser, everything except the Memphis onion dip was bought.

Including the baby carrots I picked up on my way home from work the day of the fundraiser because Primo messaged me in a panic after realizing that he did not have non-pita food for the hummus.

(I would have had the table laid out the weekend before, with sticky notes of which food would go where, which would mean I would have known a long time ago that I didn't have the carrots, but that is not how Primo rolls.)

(But I was going to the store anyhow because it was $1.99 milk day and we needed milk and the store is on my way home.)

(And I found a bag of candy corn for what I thought was only a quarter but turned out to be $1.25 which was still fine because I am one of those weirdos who loves candy corn.)

(Although only in very small doses.)

We had the food you see in the photo. But - people didn't finish it. As in, there were a ton of carrots left over.

What on earth does a person do with almost two pounds of baby carrots? Especially when a person and the other person are about to go out of town for a long weekend and upon return from that long weekend, one of the persons has a medical procedure (part of an annual physical) scheduled that requires she not eat a lot of bulky foods? Baby carrots go bad pretty quickly because they are wet.

So today was all about making baby carrot and ginger soup.

At least the fundraiser wasn't a total loss - there is soup.

Primo: What do you think about the email I sent out this morning?

Primo: About my campaign launch event!

Primo: I need to add you.

Me: No! I do not want to be on your list! I don't want to get your emails!

Primo: But I want you to get them!

Me: I live with you. That's enough.

Primo: But - you need to be on the list.

Primo: I just added you.

Primo: I clicked, "This person gave me permission to email them."

Me: I didn't! I didn't give you permission!