In which Primo and I have to build up that wall 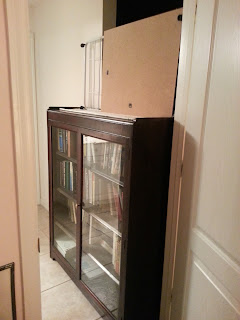 You guys, I am too tired to write much (which you have probably noticed in some of the recent posts, where I took notes during the event and wrote it up later, reducing some things to the level of "Doris died. We had a funeral. The end."), so I am going to share this photo with you.

This is the hallway outside of the guest room at Sly and Doris' house.

The bookcase is in front of the door and there is a piece of plywood on top of the bookcase (with, later, my suitcase added to prop up the plywood) to keep the cats from trying to get into the bedroom all night, which is what they did my first night there, hurling themselves at the door handle (a lever, not a knob) with loud desperation at 3 a.m. and again at 5 a.m.

Have you ever heard cats jumping at a door? In the middle of the night?

It is very noisy.

"My parents thought there would be a actual door in that opening," Primo explained.

"Do they know what a door looks like on an architectural drawing?" I asked.

I guess the answer would be no.