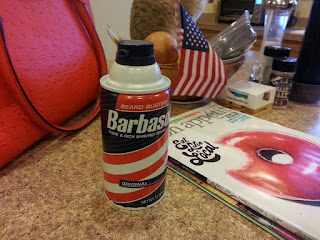 I convinced Primo to get rid of the rest of the Barbasol, which he brought back from Florida, I guess in the carload of stuff that also included a reel to reel tape player and his parents' ashes, both of which are still in our house. That was Thanksgiving, this is the end of April. I will leave the (sad) math to you.

However, last weekend, he did throw out the 15" stack of newspapers dating back to 2011 that had been stacked in the back of his office, so I will take it. Little by little. There is only so much a person can do when a person is in a partnership and not a dictatorship.

(Speaking of dictatorships - I do not like to venture into politics here because I do not want to talk about politics with anyone, even people I agree with, but Donald Trump scares me. I have never worried for my country before like this. I hope my worry will be for naught.)

Primo agreed to get rid of the Barbasol. It went like this:

Primo: I guess I should get rid of this shaving cream, huh?

Primo: There is still a can and a half!

Primo: Maybe we can give it to charity? Not the half can, of course.

Primo: But the full can.

Me: I really don't think anyone wants to use that stuff! It's nasty!

But - there it is - on the kitchen counter, waiting to be put in the bin downstairs where we accumulate the stuff for Goodwill and for the homeless shelter.

So I took a photo and uploaded it here and as I was doing so, I saw this other photo of shaving cream that I took around Thanksgiving. Did I post about that here? Or was it just on facebook?

The conversation about the FOUR CANS OF SHAVING CREAM living on the bathroom counter went something like this. I don't remember the details, but I have known Primo long enough to know how it would go.

Primo: I don't want to waste any!

Primo: But when I am in a hurry, I don't want to take the time to get the last little bit out of the ones that are almost empty.

Me: Could they at least live in the cupboard?

Primo: There's room for them here.

Me: Not the point. 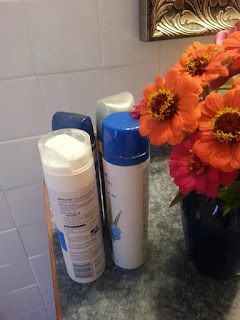