Primo and I had a huge fight last night. He finally arrived in Florida and discovered that even though the house is under offer, realtors have still been showing it. One realtor left the A/C running, which he was not supposed to do, and another left the back door open.

Primo was freaked out and angry and then he discovered things were missing from the house, like a bottle of laundry detergent and a knife. (Although he had a garage sale and sold most of the furniture, there are still a few items there that Stephanie will take once Primo is gone - Primo stays in the house rather than have the estate pay for a hotel, so he needs things.)

Anyhow, he thinks Jack might have taken the laundry detergent.

I pointed out that when thieves break in, it usually is not for small household goods.

But he was super cranky and so we had a fight - our first major one since the Cheese-Throwing Incident of 2015.

I guess we were due.

The big difference between Primo and me is that when Primo is having a rough time, he wants to talk to me about it.

When I am having a rough time, I don't want to talk to anyone about it. I just want to write about it.

And I am not crazy about listening to someone else talk about his rough time but I guess that is part of being married.

Anyhow, we had a huge fight and now it's over and we have come up with a plan in principle of how the next few months will go.

Before we came up with the plan, I suggested to him that perhaps he might be happier not married to me and he was shocked that I would even consider that. "But then I would really be alone!" he said.

I shrugged. "You would get to do things your way all the time. It seems to frustrate you that I do not share a lot of your habits."

He was shocked that I would even bring it up. But two of my friends are divorcing after 30 year marriages. Not their choices - their husbands walked out. There are some divorces where I could have said, "Yeah, I saw that one coming," but not these two. I think men get to a certain age and realize there are paths forever closed to them and think that the solution is not to count their blessings but to change their wives. I hate this for my friends and I think the men will be sorry.

I think Primo is not happy with his life right now but I guess he doesn't think I am the big problem.

We agreed to a plan.

1. He will consider resigning as trustee and will talk to the lawyer about a possible plan and the lawyer's recommendation. He is reluctant to hand it over to the lawyer because


2. He will take three months off without doing anything.
3. We will discuss at the end of three months.
4. In the meantime, we will take off Thanksgiving weekend, even though he is bringing boxes of papers back with him. Starting next week, we will spend 30 minutes a day working on stuff.

I beg of you. Please do not leave all your junk for your children to deal with. 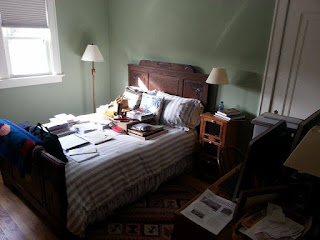 I told him that I just want a plan and I want the plan not to be "Primo never works again." He said that is not his plan but he can't go into politics now because it is so so dirty and he can't stand it.

I don't know why it has taken him so long to realize this.

Then I said I would talk to him tomorrow and he said maybe tonight and I said, "Right! You and Jack and the kids are scattering the ashes tonight."