Primo: My mom was upset that you didn't eat her onion rings at supper.

What he says is true. I didn’t eat the onion rings at supper. I ate them while I was cooking them. They’re only really good in the minute or two after they come out of the hot fat. Once they’re cold and the fat congeals, they are nasty. But hot and salty fat? Oh that’s good.

Me: She said something?

Me: The onion rings she insisted on having and that I had to make because she was too tired to stand for half an hour and I couldn’t watch an old lady suffer like that?

Me: She's been stressing about this since Christmas?

Me: So what? What if I didn’t? There is nothing in the contract that the girlfriend/someday wife to be of the son has to like everything the mother cooks.

Primo: She says she is reaching out to you and you keep rejecting her.

Me: Do you think maybe your mom is just a little bit self-centered?

Poor Primo. He's the one who is actually related to them. I have the luxury of getting to be dramatic, loud and indignant.

I am the voice for the voiceless. I am the guide in the darkness, the tall figure holding the torch aloft, assuring those who would approach me that yes, what they are hearing is insane and outrageous and they are right to wonder if perhaps there is a different reality out there.

If you grow up with The Crazy, The Crazy becomes The Normal. You don’t know that Crazy <>Healthy/Functional because you see nothing else. It feels bizarre, but perhaps that’s how life is supposed to feel. 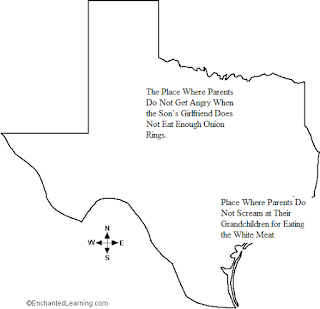 I am the beacon. I am the lighthouse, guiding the Victims of The Crazy into the Shore of the Place Where Parents Do Not Scream at Their Grandchildren for Eating the White Meat and Do Not Get Angry When the Son’s Girlfriend Does Not Eat Enough Onion Rings.

Poor Primo. He has the hard part. I get the Righteous Indignation. Is there anything better than valid, righteous indignation? Oh, to be wronged in a way that is so wrong but yet, really, so unaffecting? I mean, WHO CARES IF I ATE THE ONION RINGS? A delicious wrong that doesn’t really hurt but validates your opinion of the crazy people who are wronging you? A wrong that lets you rant and rave and nobody can say you are unjustified in feeling wronged? I love that feeling.

Me: Is it possible that one, I ate a whole bunch of onion rings while I was frying them, WHICH I TOLD HER AT SUPPER, or two, I just wasn't that hungry because I was taking migraine drugs that kill my appetite? Or three, maybe I don't like onion rings and if I don't SO WHAT? And guess what? None of these possibilities have anything to do with your mother! None of them! Why is she trying to make this about her? It's not always about her!

Yes, I am over-reacting.