Ch 5 Christmas day We exchange our Christmas gifts, which is torture for me because 1. I have to smile and be nice to Sly and Doris and 2. My family is not big into gifts of stuff – we consider being together the gift

Doris gets me everything on the list I made of gift ideas. Everything. Every single thing.

Doris 1, Goldie 0. Or Goldie negative one for apparent greed.

Me: You told her that was just ideas, right? You didn’t tell her I expected everything on it. I expected just one of these things. One. Actually, I didn’t want anything at all.

Primo: Of course I didn’t tell her to get everything. She just goes overboard. She’s like that.

Try to look at it as a generous gesture, I tell myself. See the good in it.

Doris gives Primo a custom jigsaw puzzle of a map of his neighborhood.

He shoots me a confused look.

Doris sees the look: You got one for me for my birthday a few years ago.

Primo: Yes. Dad told me that’s what you wanted.

Just what everyone wants: a custom gift that he didn’t want that cannot be exchanged.

Primo didn’t hear pop music until he went to college, where he went a little overboard and bought everything he liked. He says that Britney Spears actually is a good singer and that his collection of Britney Spears CDs has nothing to do with his childhood deprivation and the inability to learn good judgment at a young age. 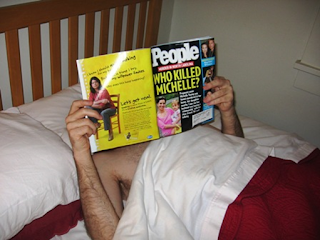 Indeed, Primo so threw himself into pop music – including music from before we were in college – that his superpower now is that he has to hear only one song on the Sunday morning re-broadcast of Casey Kasem’s American Top 40 to know which year the show aired.

That, my friends, is the impressive result of listening to a lot of pop music.

Parents, your children will rebel if you deny them things. Look at what happened to me with TV. We didn’t have TV when I was a kid – partly because we lived abroad but mostly because my parents were concerned we wouldn’t read enough if we had one.

Once I had a chance, I watched nothing but trash. Ask me anything about Three’s Company. Anything at all. I have watched it. And The Ropers. I had not learned to be discriminating. Better to inoculate your kids with small doses of pop culture and junk food so they won’t feel deprived and go overboard later.