Not the happiest of occasions, but my grandmother was 97. She lived a good life, surrounded by people she loved, and people think of her and smile. 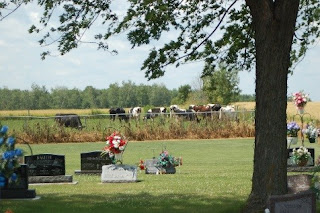 We fly to Minneapolis, drive to Medford, and gather the day before at my aunt Rita’s house to cook for the funeral. My aunts and cousins are there. Primo joins us making dinner rolls and strudel and rhubarb bars.

Nobody will go hungry on my family’s watch.

The funeral is crowded. Not too shabby for a small-town funeral. Full church, full lunch afterward.

PS There is no licking of the cheeks. I think my cousin is reformed. Good.

And now it’s time for one of my favorite jokes.

Ole was on his deathbed. Pastor Inqvist had been there to give him the last rites and had left. Ole was lying in his bed, waiting to die. It is very boring waiting to die.

Ole noticed a wonderful fragrance wafting up from the kitchen. Could it be? Could it possibly be his favorite rhubarb bars? His favorite dessert in the whole wide world?

"Lena!" he tried to call, but his voice was too weak and he sounded like the guy in the Man Cold video who croaks out, "Laura!" but she can't hear him.

He spent a few minutes recovering from the attempt to call Lena, then made a decision. He tried to sit up, but he was too weak. Too weak to sit up in bed.

So he rolled. He rolled over out of bed and fell to the floor.

He spent a few minutes resting, then began to crawl, one painful, slow inch at a time to the stairs.

Once he got to the stairs, he rested for a few minutes, then turned around so his feet were facing down and bumped his way down the stairs on his butt, one stair at a time.

When he reached the bottom, he rested, then rolled over onto his stomach and crawled into the kitchen. He got to the island and painfully pulled himself up to the counter, where Lena had cut the rhubarb bars and placed them on a plate.

He reached for one, grabbed it, and was about to take a bite when Lena walked into the kitchen. She ran to him, shocked, slapped his hand, and said, "Ach, Ole! Shame on you! Dose are for after da funeral!"
Posted by the gold digger at 9:46 AM