I need a wedding dress. I don’t care about having a white fluffy dress. I bought one of those when I was engaged to marry my college boyfriend, right after he proposed. I should have waited a little while and not wasted my money. We broke up only a couple of months after we became engaged.[1] That’s what I get for being prompt.[2]

Some women look good in a fluffy muffin dress. Some of us do not. I definitely do not. Why I bought a fluffy muffin dress back then I don’t know. It was a demo model and it fit and it was only $250.[3] Price should be part of one’s wedding dress purchasing decision, but it should not be the only factor.

I gave the muffin dress to Goodwill. Putting an ad in the paper[4] to sell my unused wedding dress didn’t appeal to me. Mostly because I was worried about letting strangers into my apartment, where they would pull a knife on me and steal the dress and – well, there wasn’t anything else to steal. I lived in an efficiency on Sunset Drive in Houston and had my old twin bed from home, two folding wooden chairs from Pier One, and a thirty dollar table from Aaron Rents.[5]

But you know – they could hold me up. Although I’ve never read of a wedding dress or folding chairs or a bed or a table being stolen at knifepoint, it could happen.

Today, I would just put it on eBay. Oh eBay, where were you when I had a wedding dress to sell and couldn’t deduct the donation because I didn’t itemize? I am always in the wrong time.

This time, I want a red dress. I look far better in red than I do in white. Who says you have to be married in white? What is this wedding industry tyranny that puts women in a color that flatters very few?

I also want a dress that I can wear multiple times. When you are older and paying for everything yourself, you realize that spending three months’ mortgage on a dress you will wear only once is not what you want to do.

My objective is also not to spend a lot of time shopping, as I hate shopping. I do. I’d rather read a book. 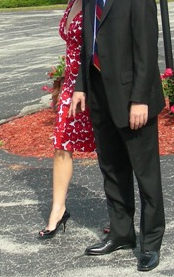 At Macy’s, I find a red and white sleeveless dress with an empire waist (thank you, Stacey and Clinton – those hours watching What Not To Wear were not wasted) with a slightly gathered skirt. The deep V-neck makes me look like I have a bosom, which is more than pregnancy is doing. That is quite an accomplishment for a dress. AND it is only $39 on sale!

[1] I did give the ring back.
[2] We broke up because I realized that I did not want to get married at the age of 22, not because there was anything wrong with him. He went on to marry one of my college roommates, which seems kind of weird, but they didn’t start dating until years after I broke up with him, so no Roommate Rules were broken. I have totally googlestalked them because I love to know how the story ends. Three gorgeous kids. They are both professors, him in engineering and her in comp sci. They are both pretty smart cookies. I hope they are happy and wish them well.
[3] Considering I was making only $20K a year and was paying back my student loans, I realize that $250 is not an “only.”
[4] Seriously – this was ages ago.
[5] That I still have. That table has been, on a use per dollar or use per year basis, one of the best investments I have ever made. It is solid wood and has served me well. Thank you, Aaron Rents, for a fabulous bargain.
Posted by the gold digger at 1:23 PM