Ch 12 Doris and I make an apple pie and I try to be nice, but man, is it hard, even though it was my own stupid Bond with Doris idea

After Primo and I eat lunch, which we do every day (although rarely together because he is the slowest eater in the world and I HAVE THINGS TO DO) because that’s how we roll, Doris asks if I want her to show me how to make an apple pie for Primo.

OK, Doris does not say she wants to teach me to make a pie. In her defense - and it pains me to say this because I want to be the hero and them to be the Bad Guys but really, it is Sly who is the Big Bad Guy and poor Doris has to be Bad Around Sly So He Does Not Turn On Her - I might have said something to her about, "Oh you have to tell me your secret for apple pie because Primo is always raving about it!" I might have asked her.

But a while ago. Before they threatened to boycott our wedding.

(Which I am still furious about.)

(But I have to be nice to Doris because Sly is such an asshole.)

Indeed, if I look back through my emails, I might even find this:

Me: Thanks, Doris. I was also thinking about our making an apple pie. If you want to direct, I'll do the hand work. Primo says nobody else makes an apple pie as good as yours. I know that pie we made at your house – when was it? Last year? The year before? – was delicious. Perhaps you could pass on your secret to me. (Or at least leave it to me in your will!)[1]

Doris: Would be happy to collaborate on an apple pie--I'll need some regular Crisco to make the crust.

But I didn't mean it. Primo isn’t always raving about her pie. I said that to be nice. And I don’t need any apple pie secrets. I make really good apple pie. Excellent apple pie. It’s not that complicated and Doris certainly has no secrets. She actually makes pie wrong, what with peeling the apples.

I don’t want to make a pie with her. All I want is for her to say something like, "Oh, I use this secret spice," so I can open my eyes wide, nod, and say, "Oh! So that’s it! I'll have to try that the next time I make a pie. Thank you so much!" and we will be done with it and everyone will be satisfied. I will get credit for acknowledging her pie-making ability but I won’t have to actually do anything.

I am a Pie Bitch. 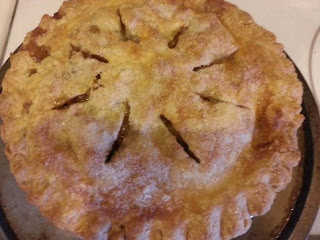 But always makes an apple pie for Primo. Apple pie and onion rings. Those are her things for Primo and it is sweet.

You know I'm going to get snarky with this. But I have acknowledged and I will acknowledge a mother's love and give Doris her due. Mother's love. Check. Wanting to show that love through preparing special food. Check and duly acknowledged.

But you know what really happens because you have already seen it. As with the Pie of ‘XX – when was that? Ought Something – and the Onion Rings of Ought Something Else, Doris proposes and I dispose. As in, she supervises while I work because she cannot

All of this would be fine - well, not fine, really, but just a fact - except she still wants to make that apple pie for Primo.

Which she cannot do because of See 1. And 2. Above.

Although I will suck it up and pretend to be nice and be the sous chef when I am visiting Sly and Doris, I do not want to be sous chef IN MY OWN KITCHEN.

I have everything we need to make an apple pie because my kitchen is stocked for the apocalypse. I'm like that. Got it from my mother, PBUH.[2] If you're worried about being in the right place when they drop the Big One or when the asteroid hits or whatever your preferred form of Final Destruction is, be at my mom's house or at our house.

Probably our house, because unlike my mom, we have over 300 bottles of wine in the basement, but my mom is better organized, just because she doesn't have to argue with Primo about what to keep and what to discard. That's what being a widow means: complete control over the basement. Complete control of all stuff. All of it.

My mom has about ten years’ worth of food in her pantry and chest freezer. It’s all labeled. All of it. I cook big batches and freeze stuff as well, but I always think, “Oh I’ll remember what this is – it’s gumbo! Or it’s harira! ropa vieja! I don’t need to label it.”

A month later, I am looking at the Rubbermaid container in the freezer, wondering, “What the heck is that?” You can’t even tell by opening the lid and looking unless it’s something obvious like macaroni and cheese or broccoli cheese casserole.

Still, we have lots of food. It’s just that supper might be a surprise sometimes.

I get out the apples and the lard and the flour and the salt and the sugar and the cinnamon.

Doris: Not LARD! I told you to get Crisco!

Of course lard, . Lard is what makes your pie crust flaky.[3] Don’t you know that? She does have cookbooks and subscribes to a few cooking magazines. Hasn’t she seen the research? Doesn’t she read?

Me: I didn’t get Crisco. I never use it for anything else.

Doris: I can’t use lard.

Too bad so sad. We are at a pie stalemate. I guess no pie!

Me (just to be polite, even though I know an all-butter crust is just wrong): OK. How about butter?

I take a deep breath – no arguing, no arguing! – and put the lard back into the fridge. I pull a stick of butter out of the freezer. We don’t eat enough butter[4] to keep it in the fridge or on the counter. I usually have warning that I am going to bake with butter so can get it out to thaw. I have that warning because always, I am the person baking.

Doris: Would you please give me a paring knife?

Me: Would you rather have a potato peeler?

Doris: No. A knife is fine.

Me: OK, here – this one is nice and sharp. But you don’t need to bother peeling. Primo actually prefers his apples unpeeled.

But he does! He does prefer unpeeled apples! I told her this the last time we made pie together and I am telling her now. I know how Primo likes his apples.

Doris, after peeling just one apple: I need to sit. Just for a minute.

She sits at the kitchen table and breathes heavily. Peeling an apple can be taxing. There is one peeled apple on the counter. One. One apple. One out of eight apples to go in the pie.

I do what has to be done. I take over. Like I am going to make her peel all of them?

"You started this project, missy, now you're going to finish it?" You don’t say that to weak old lady, even if she is annoying you. It’s mean.

I put the paring knife in the sink and get the potato peeler from the drawer. That, Doris, is how one peels apples if one does peel apples, which one should not.

I am faking being nice to her. This is not how I want to spend my Sunday afternoon. I don’t want to spend it having a miscarriage and baking an apple pie with someone who threatened to boycott my wedding and told my fiancé not to marry me. Or someone who didn’t stand up to her jerk husband when he threatened a boycott.

She stands to make the crust. As she mixes, she is explaining pie crust to me. To ME!

The secret of pie crust is mine. You use lard. Lard is what makes a flaky crust, not butter. Butter is not fluffy. That’s why you use half butter and half shortening (Crisco or lard) when you make cookies. Butter is too flat. It tastes good, but it is flat.

I certainly know not to overwork the dough. I know to sprinkle the mixture with ice water – which she does not do – once the fat is worked into the flour. I need no pie crust coaching.

She can’t stand to finish the crust and has to sit while I take over. She instructs me from her seat. I clench my teeth as I do as she directs. I know how to make a pie. I do not need her to tell me what to do.

I cannot believe that I am having to take pie-making instruction from someone who is not even a good cook. She fed Primo store-bought cookies when he was a boy. Yes. Store bought.

No wonder he thinks Oreos are good. He’s never had a good cookie in his life. My mom makes cookies from scratch, which is why I don’t understand the appeal of Oreos at all. They are nasty. Hard, dry exterior cookies bound by sweetened, gag-inducing fat. How many children have been fooled into thinking Oreos are good just because they have never tasted anything better? No wonder people eat SpaghettiOs and Lean Cuisine and Hamburger Helper and Kraft Mac and Cheese. They don’t know any better. BlessTheirHearts.

And sorry, Primo, but I have eaten at your mom's house and her cooking is not All That. Maybe she was better when she wasn't arthritic, but I am not seeing any big pie secrets in this pie. As a matter of fact, she is not even putting anything in the filling to soak up the juice and keep it from burning, so I already know more than she does.

But I keep my mouth shut. And pretend to be nice. But I am not being Real Nice. It is Fake Nice. Nice on the outside but not on the inside, so it doesn’t count but I don’t care. Insincere Nice.

[1] Quick reference to Primo’ being disinherited!
[2] Except of course she is alive. But still PBUH.
[3] However. I have since decided that half lard and half butter – or something like that – is a better way to do it. Use the Bon Appetit recipe for pie crust but substitute lard for the shortening and for some of the butter. http://www.bonappetit.com/recipe/apple-brown-sugar-pie. It is yummy.
[4] Not because I am morally opposed to butter but because I have been fat and I don’t want to go back.
Posted by the gold digger at 1:00 PM