Ch 12 Doris falls down our stairs and I worry that she might 1. Die or 2. Injure herself so badly that she has to stay in our house for months recovering

Sly and Doris aren’t hungry, which I know because as soon as they walk in the door, I offer them food and water (BAM! THAT, Sly and Doris, is how it is done) but they do want to see the house, which, upon thinking about it, is an odd custom. “Come, person who does not live here! Let me show you the private areas of my home, which may or may not be company-ready and on which you will judge me!”

I don’t want to show them what’s behind my doors because they I have never seen their spare room, the room where Primo slept the very first night. Fair’s fair, I say. But I am distracted by events and so surrender.

Doris makes it up the stairs very slowly. She shuffles around the upstairs slowly. There is not much ground to cover, but it still takes her a very long time.

She walks down the stairs very slowly. I walk ahead of her, thinking that if she falls, she will at least land on something soft. 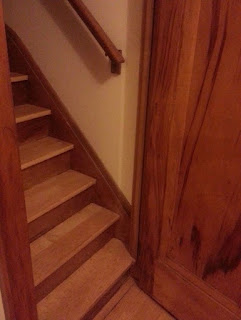 I know! I don’t really like her that much, but she is fine with me when we are alone – which is almost never – and I do feel sorry for her, having to live with Sly. I have seen how he treats her when there are witnesses. I shudder to think what he’s like when they’re alone.

Just after I step off the last step and move away from the stairs, Doris…

Falls down the stairs.

She is not drunk.

(We have not given them any booze. Maybe she drank on the plane?)

She is an exhausted old lady and, in her defense, our stairs are kind of weird. The banister ends before the stairs do. If you’re not paying attention, you’ll miss the last step. The tread is also narrow and the stairs are slippery polished maple. Pretty, but slippery.

I turn just in time to see her falling.

Even if you do not like a person, it is a horrible thing to see her falling.

In slow motion, she stumbles on the last step. Pitches forward. Puts her arms out. Puts her arms down in front of her to break her fall. No sound. Just horror on her face that I am sure is mirrored on my own.

You do not want to see someone falling down the stairs in your house.

She falls forward, face down, arms flailing. There is a horrible thud and then she lies (lays? So many stupid people who don’t use the proper word! Oops – if I don’t use it properly, I guess I am beneath Sly’s contempt) sprawled in the hallway like those chalk outlines of murder victims. Her right arm is underneath her and her head is turned to the side.

I run to her, kneel, reach for her.

Primo pushes past Sly as he runs down the stairs. He kneels by his mother.

Primo: Mom, are you all right?

Me: Should I call an ambulance?

I don’t want Sly and Doris in my house, but I also do not want them injured. For their own sake, but also because I do not want with a broken hip and unable to travel staying in our bedroom for the next four months.[2]

The nightmare looms: constant requests for help to the bathroom or for a drink or for something to read or just to talk because she is bored. I will have to divorce Primo [3] and move out just to avoid it.

Primo: Let me help you.

Primo gently examines her arms and legs. Everything appears to be in the proper place with respect to the joints and bones; it doesn’t seem like anything was broken. She is conscious and lucid. There is no blood, either on her body or coming from her mouth as she exhales. She can breathe. If there are other things we should look for, we don’t know about them.

Primo: Mom, I think we should call an ambulance. Or at least take you to the emergency room.

She closes her eyes.

Sly hovers, unable to do anything. Even though at 260 pounds, he weighs more than twice as much as Doris, he has bad shoulders and knees and can’t lift her. Plus he’s old.

lies on the floor, breathing heavily.

We move into the kitchen where we can see her.

Me (whispering): Shouldn’t we call an ambulance?

Primo: I don’t know! She said she wants us to leave her alone!

Me: Yeah, but how would she know? What if she’s hit her head? She could have a concussion.

Primo and I look at each other uncertainly.

Me (whispering): Your dad has your mom call an ambulance every time he falls down drunk and he doesn’t even fall down stairs, but we are supposed to leave your mom after she has actually fallen from a height?

Primo looks at me and shakes his head. On Sly’s head, I guess.

[1] Yes. I actually do that. I didn’t know it was a thing, but it is an atavistic response to a Bad Thing Happening.
[2] And for our homeowners insurance.
[3] Actually, just not marry him.

PS This is a comment in real time. If I had to do this again, I would totally call an ambulance. What on earth were we thinking?
Posted by the gold digger at 7:30 PM